You are at:Home»Alternatives Channel»Are Gold, Gold ETFs A Good Bet In 2020? 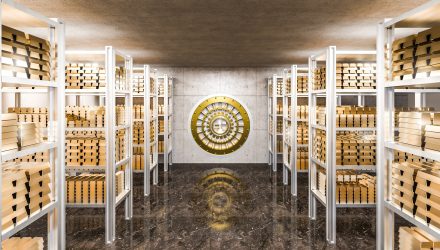 While gold has climbed 4% so far this year already, as gold prices reached their loftiest level since April 2013 early last month, since the start of February things have been more subdued.

After finishing January near its highs, gold sold off nearly $40 an ounce, and has been trading sideways since ever since, as investors pile into stocks, despite fears of the coronavirus contagion.

But analysis suggests there are several reasons why investing in the precious metal could still be a solid choice for 2020.

With gold making a strong showing in January, up nearly 4%, commodity-based funds were very popular, with the iShares Physical Gold ETC (SGLN) and the SPDR Gold Shares (GLD) leading the charge.

The ECB and the Bank of Japan have benchmark interest rates in negative territory. The “low real rates, and a hesitant approach to normalizing policy at the Fed, the Bank of Japan and European Central Bank” have been driving the gold higher. Right now, real U.S. rates are negative as well, and the Fed is unlikely to make changes soon according to experts, which cuts the opportunity cost of holding bullion, says Bloomberg.

Since 2020 is a U.S. election year, there may also be more volatility in the market, especially if a surprise candidate like Bernie Sanders wins. Gold price normally adds 8.99% in an election year. In the previous election year too in 2016, GLD had gained about 8%.

The chart below shows the average annual return of gold (London P.M. Fix) in presidential election years between 1973 and 2016.

With the Fed looking to increase the current muted inflationary backdrop in the United States, investing in the metal could be beneficial for gold bugs as it is often viewed as a hedge against inflation

Global Economic Uncertainty And The Coronavirus Could Cause Problems

Trade war worries may have eased somewhat since the start of 2020 but concerns of a global economic slowdown have resurfaced. In spite of a strong U.S. economy and healthy looking stock markets, more than half of the chief executive officers (CEOs) expect the global economic growth momentum to decelerate this year, per a survey done by PwC and released at the World Economic Forum in Davos, Switzerland.

The WHO declared the virus a global health emergency last month, a rare designation that helps the international agency mobilize financial and political support to contain the outbreak. Since then both the number of cases and number of deaths has roughly doubled, although that number may be stabilizing according to experts.

Given the analysis of why gold could be a good investment this year, investors can begin to keep track of regular gold ETFs like GLD, iShares Gold Trust (IAU), the Aberdeen Standard Physical Swiss Gold Shares ETF (SGOL) as well as leveraged ETFs like the VelocityShares 3x Long Gold ETN (UGLD), and the DB Gold Double Long ETN (DGP), which offer opportunities to invest in the metal depending on risk tolerance and trading experience.