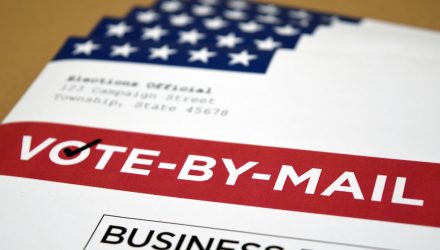 Many financial advisors may be questioning how the market will look following the U.S election on November 3.

Early predictions may show a relatively stable reaction, regardless of the outcome. ETF Trends spoke Chief Investments Officer for AGF Investments LLC, and Head of AGFiQ Alternative Strategies, Bill DeRoche, to discuss what advice there is for advisors attempting to position their portfolios around the upcoming vote.

Regarding the election, DeRoche notes how he’s spoken with AGF’s Chief U.S. Policy Strategist, Greg Valliere, who believes the market, at this point, has accepted either candidate. While former Vice President Joe Biden has been the favorite, and the market hasn’t missed a beat in heading down this path all that much.

Meanwhile, Goldman Sachs did present an article explaining how they have assigned a higher probability of a contested election. That said, Valliere suggests while this high probability is there, it is a tight race, and based on what’s been seen, it does also mean there’s risk concerning mail-in ballots that is being underestimated.

DeRoche adds, “From that perspective, we’re really not suggesting that clients need to do much to their portfolios just from the election perspective, other than to recognize that things will pause for a bit, and then likely move higher.”

Looking at these possible outcomes closer, such as the democrats taking back the Senate, based on Valliere’s analysis, DeRoche notes how while things are tight enough where it will ultimately come down to the winning Presidential candidate to tip the scales to one side.

With that in mind, that’s a high-risk situation and were the democrats able to have control of all three branches, there would be less concern for issues to be held up with the Fed, though not without causing some harm in the process.

The Need for Stimulus

One of the things to look towards, following the election, as DeRoche explains, is the need for stimulus. It’s going to happen, despite the amount of gridlock in Washington D.C. in that regard. That said, the Fed has made their case clear that the politicians know they have to do something.

“Once the election is over,” DeRoche states, “We’ll get some movement, and there will be some additional stimulus, which will help tide us over until we can continue this reopening that we’ve started.”

Even with higher cases due to Covid-19, DeRoche doesn’t expect there to be many shutdowns. There may be a slowing of openings. However, there’s no real logic in another full shutdown.