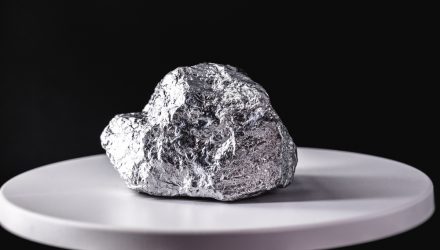 A Palladium ETF Is Rallying on Supply Concerns

A palladium exchange traded fund soared on Friday, with palladium prices briefly trading above $3,000 per ounce for the first time since May and nearing an all-time high, as supplies from top producer Russia came into question.

The abrdn Standard Physical Palladium Shares ETF (NYSEArca: PALL) jumped 7.0% on Friday, with the palladium spot price up 7.1% to $2,982 per ounce.

“Palladium is the one commodity from Russia that accounts for a sizable amount of exposure to the country, so it is in the sweet spot in terms of its impact,” ED&F Man Capital Markets analyst Edward Meir told Reuters.

Russia is a key palladium producer, accounting for 40% of all mined production. The precious metal is largely used in catalytic converters in automobiles to reduce harmful greenhouse gas emissions, and supplies are almost always transported by passenger planes, which have been cut off from many Western countries due to sanctions. With most of Europe’s airspace closed to Russia, miners are looking for alternative routes to supply paying customers, Bloomberg reports.

“There’s growing consensus that Russia is not slowing down its military campaign and you’re only going to see sanctions become a lot harder, and that’s really going to disrupt businesses to get their hands on that supply of palladium,” Edward Moya, senior market analyst at OANDA, told Reuters. “Flight bans, logistical issues and sanctions will keep palladium very bullish because this is happening during the time when demand is starting to pick up significantly.”

“Russia-Ukraine crisis will continue to support the prospect for higher precious metal prices,” Saxo Bank analyst Ole Hansen said in a note. “This not only due to a potential short-term safe-haven bid which will ebb and flow, but more importantly due to what this tension will mean for inflation, growth and central banks’ rate hike expectations.”