You are at:Home»Featured»Airline Stocks Unafflicted by Summer Travel Chaos 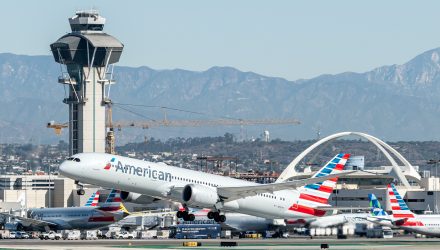 With summer travel heating up over the last couple of months, as cagey consumers sought relief from the coronavirus restrictions, travelers’ complaints to the federal government also rocketed nearly 18% in June from the prior month, due to escalating flight cancellations and other disruptions, the Department of Transportation said. This does not appear to have affected airline and leisure ETFs on Friday.

The Department of Transportation, or DOT, fielded 4,176 complaints about air service in June, with over 55% of them involving requests for refunds. Notably, the DOT also received one compliment but did not state which airline or topic it was about.

Airlines are battling staffing shortages this summer as a spike in air travel demand overwhelmed their expectations. Just last year, the airlines had urged thousands of staff members to consider early retirement or time off to reduce costs.

Ten U.S. airlines canceled 1.6% of the 573,779 domestic flights they scheduled in June, which equated to nearly a fourfold increase in the rate compared with May, the DOT said. The on-time rate dropped to 74.6% from 86.2% a month earlier.

The flight cancellations have not been without incident. Reports of verbal abuse, a failure to follow the federal mask mandate, and assault by airline passengers are just a few of the issues that are becoming more common. Now, airline industry groups, flight attendants, and lawmakers would like government intervention to help curb such behavior.

The Federal Aviation Administration recently said it has recorded approximately 3,100 reports of disorderly passenger behavior since the start of 2021.

The agency said it has so far proposed fines totaling $563,800, though recent agency releases describe incidents that supposedly happened in February, meaning the issue could be more widespread than what is currently being recorded.

The FAA implemented a “zero tolerance” policy and warned of fines of up to $35,000 earlier this year, after a series of politically motivated incidents around the time of the riot at the U.S. Capitol on Jan. 6. Passengers have one month to argue the fines, as unruly passenger behavior or interfering with flight attendant duties is a federal violation.

Flight attendant unions complain of insults, shouting and vulgar or demeaning comments, and even violence from passengers, some of whom are intoxicated.

“It’s out of control,” said Paul Hartshorn, spokesman for the Association of Professional Flight Attendants, which represents American Airlines’ more than 20,000 cabin crew members. “It’s really coming to the point where we have to defend ourselves.”

Flight attendants are exhausted and frustrated by the lack of respect.

“Even if it doesn’t rise to the level of a physical altercation, just the constant bickering and name-calling and disrespect, that wears away at people,” said Sara Nelson, a prominent labor leader and international president of the Association of Flight Attendants-CWA, the largest flight attendant union with some 50,000 members across more than a dozen airlines..

Most of the cases are related to passengers’ refusal to wear masks on board.

“What we know is that entitlement is correlated with anger, meaning the more entitled you are the angrier you get,” said Ryan Martin, a psychology professor at the University of Wisconsin-Green Bay, who is the author of “Why We Get Mad: How to Use Your Anger for Positive Change.”

“We’ve seen lots and lots of example of people losing their cool and having what I would call tantrums in the last year, very publicly,” Martin said. “Some of that may have modeled a way of dealing with problems for people that isn’t really a healthy, reasonable way to deal with problems.”

At a hearing recently, Rep. Bennie Thompson, D.-Miss., chairman of the House Homeland Security Committee, and Rep. Sheila Jackson Lee, D-Texas, asked Homeland Security Secretary Alejandro Mayorkas about what the agency is doing to combat the assaults and other unruly behavior on planes and at airports.

“We also have prepared federal air marshals to address any act of violence that they themselves observe while on flights,” Mayorkas said. “Importantly, we are working with law enforcement to ensure that these acts are met with the full force of federal law. These individuals who commit these heinous acts are prosecuted to the full extent of the law.”

“At the gate we can handle it but at 35,000 feet that becomes a serious problem really quickly,” said Hartshorn. He said some of the incidents are between passengers, forcing flight attendants to step in.

While the issues with flight cancellations and customer behavior have been on the rise, it wasn’t all bad news for the industry.

Hawaiian Airlines, Delta Air Lines, and Alaska Airlines had the most impressive punctuality in June, posting rates of  87.7%, 86.8%, and 80.7%, respectively. American Airlines was fourth place in prompt arrivals at 74.3%, with Spirit Airlines at 74.1%, United Airlines at 73.9%, and Frontier Airlines at 69.5%.

One of the most notorious recent issues with air travel was the Spirit Airlines debacle, where the airline canceled over 2,800 flights during a spate of bad weather. American Airlines also had its share of issues at that time. The DOT data does not cover the late July and early August meltdown at Spirit, however.

For investors interested in air travel and leisure ETFs, there are several options to consider.

The U.S. Global Jets ETF (JETS) is one fund that was marginally higher on Friday, while the First Trust Nasdaq Transportation ETF (FTXR) gained almost half a percent Friday.

According to Investopedia.com: “JETS, the only pure play airline ETF, targets the U.S. Global Jets Index. About 80% of the index’s components are domestic airlines and companies involved in the aviation industry, and 20% are international companies. JETS is a blended, multi-cap ETF, although it is weighted predominantly toward large-cap companies. The fund’s portfolio is heavily weighted toward a small number of major U.S. airline companies. The top holdings of JETS include American Airlines Group Inc. (AAL), a domestic and international carrier; Southwest Airlines Co. (LUV), a low-cost carrier; and United Airlines Holdings Inc. (UAL), a domestic and international carrier.”