You are at:Home»Featured»Airline Stocks And JETS ETF Slump Despite Furlough Agreement 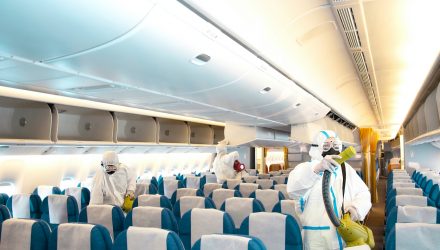 Airline stocks and related ETFs are falling on Wednesday, even as United Airlines and the union that represents the carrier’s 13,000 pilots have come to an agreement that could prevent furloughs of nearly 3,000 pilots.

Despite the news, United Airlines tumbled Wednesday while the majority of the broad market has been recovering from a brutal loss in technology shares that has dragged the rest of the market down over the last week.

The coronavirus pandemic has stymied travel demand, hurting all air carriers. As a result, United announced last month that the airline is scheduled to furlough almost 16,000 employees, including 2,850 pilots, beginning Oct. 1 when the terms of federal aid that prevented job cuts concludes.

“Any potential mitigation must achieve our goals: stop planned furloughs, stop displacements, and include long-term permanent gains for any short-term, fully recoverable modifications,” said Todd Insler, chairman of the United Airlines chapter of the Air Line Pilots Association, told union members in a note Tuesday, which was reviewed by CNBC.
United Airlines, American Airlines, and Delta Air Lines all dropped steeply in trade, losing between 2-4%, as the broader market climbed higher led by tech. The U.S. Global Jets ETF (JETS) lost 1.65% amid the furlough news as well.

The union and United have yet to offer details of the agreement and to what extent it would lower expenses. It also wasn’t immediately determined the period of time that the plan would allow for the furloughs to be postponed or avoided, as the agreement still requires ratification by union members and leaders.

United said in a statement that it continues “to try and reduce the number of involuntary furloughs at United and are happy we were able to reach an agreement in principle with ALPA that can potentially save pilot jobs.”

The airline also asserted the need to reduce fall schedules due to the cyclicality and the coronavirus pandemic.

“Because October is typically a slower month for leisure travel, we’re adjusting our schedules to reflect these seasonal changes in customer demand while resuming service or adding capacity on routes where we’re seeing increased customer demand for travel,” said company spokesman Ankit Gupta.

The company is not the only air carrier to lay off workers. Last month Delta Air Lines announced furloughs of over 1,900 of its aviators if it doesn’t reach an agreement with its union.

Meanwhile, other airlines like Southwest Airlines, Spirit Airlines, and JetBlue Airways have also arrived at agreements with their pilots’ unions to eschew furloughs. All major U.S. airlines have also proffered premature retirement packages and other benefits in an effort to defray involuntary cuts once the federal aid terminates, while unions are lobbying lawmakers to provide additional aid for lost jobs.