You are at:Home»Featured»Airline ETF Hits the Brakes on Growing Coronavirus Concerns 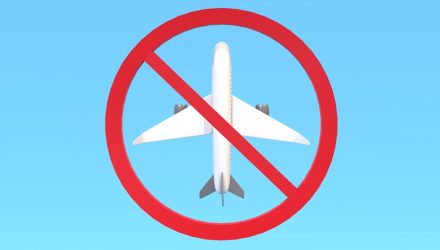 An airline sector-specific exchange traded fund is flying into some turbulence as ongoing coronavirus concerns weigh on the travel outlook.

The U.S. Global Jets ETF (NYSEArca: JETS), the lone ETF dedicated to airline stocks, dipped 3.5% on Friday and was 8.1% lower over the past week.

A number of states, including Arizona, Texas, South Carolina, and Florida, saw COVID-19 cases jump by more than 30% in the past week. The spike in infections has even caused Texas to halt reopening plans Thursday while some other governors enacted new measures to help contain another outbreak.

“Demand has improved recently despite cases on the rise, but we are concerned this could be tenuous,” Cowen’s Helane Becker said in a note, according to Barron’s.

Air travel has been increasing for weeks with higher passenger counts, but passenger traffic declined on June 23 and 24, going down to 471,000 and 494,00, respectively, compared to 607,000 on June 22. Traffic could keep declining if coronavirus cases continue to spike.

Meanwhile, the European Union was moving closer to recommending that travels from the U.S. shouldn’t be allowed entry to the bloc after July 1, Bloomberg reports. On the other hand, 18 countries, including Canada and South Korea, may be allowed entry into the EU after their level of new Covid-19 cases fell to the bloc’s criteria.

European countries are trying to balance the desire for reviving domestic economies against the backdrop of the summer tourist season as many fear a second wave of coronavirus infections.

Meanwhile, the previously positive reactions to bailout deals for the airline industry, like the debt relief plans for Deutsche Lufthansa AG and Air France-KLM, are beginning to dissipate.

“For the time being, the risk of insolvency is off the table and the funds can flow” at Lufthansa, Dirk Schlamp, a DZ Bank analyst who recommends selling the German company’s stock, wrote in a note, according to Bloomberg. Still, “major challenges await” as the carrier faces “extensive restructuring due to excessive costs,” with the airline industry unlikely to return to pre-crisis business until at least 2023.