You are at:Home»Webcasts»This Airline ETF Could Take Flight in the Summer 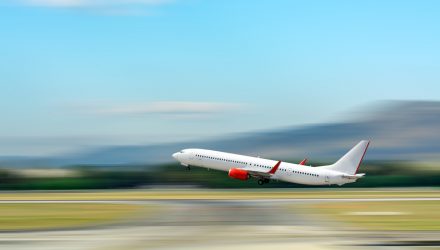 This Airline ETF Could Take Flight in the Summer

After being grounded by the global pandemic, airlines are once again ready to take flight. An airlines sector-related exchange traded fund is poised to benefit from the pent-up consumer demand heading into the historically busy summer travel season.

In the recent webcast, Airline Stocks Cleared for Departure This Summer, Frank Holmes, CEO and Chief Investment Officer, U.S. Global Investors, highlighted the resilience of the airline industry. Investors may draw similarities to what is happening now to what happened during previous global crisis events. For instance, airline stocks rebounded in the following six months after the 9/11 crisis, surging more than 80%. The industry climbed more than 120% in the six months after the SARS crisis. The sector also recovered more than 80% following the 2009 financial crisis.

Airline stocks are now recovering as coronavirus pandemic fears abate. The number of daily U.S. commercial air passengers rose to a new high of about 1.9 million at the end of May.

Many have turned to airline stocks as a way to bet on the broad recovery of an industry that has been among the hardest hit by the coronavirus pandemic after global governments halted air travel in a bid to contain the virus. The play has also been a way for investors to bet against Warren Buffett, Berkshire Hathaway Inc.’s chief executive, who sold major stakes in the four biggest U.S. carriers last year, which have may cost him $2.7 billion. Airline stocks have climbed 141% since Buffett announced he was dumping airlines.

Looking ahead, Holmes argued that business travel is expected to recover alongside leisure once 70% of the population is vaccinated. About 50% of the U.S. population has been vaccinated so far. Several major carriers are already using vaccine verification apps, such as Southwest, Delta, and United. The European Union has already agreed to allow fully vaccinated individuals to visit this summer, which may offer plenty of upside potential for European airline stocks.

Investors have turned to the U.S. Global Jets ETF (NYSEArca: JETS) as a way to access the recovery in the global airline industry. JETS has also become a popular mechanism for many retail investors to gain diversified exposure to the airline industry as opposed to betting on single airliners. The airline ETF has seen significant inflows from deep-value retail investors and institutional investors like hedge fund managers, including Migdal Insurance & Finance, Morgan Stanley, LPL Financial, and more. These inflows have accelerated and hit record highs as the outlook for an effective COVID-19 vaccine has become more promising, pushing airline stocks higher.

JETS follows the U.S. Global Jets Index, which uses fundamental screens to select airline companies, with an emphasis on domestic carriers, along with global aircraft manufacturers, airport companies and internet media, or services related to airlines.