You are at:Home»Webcasts»Airline ETF Could Be Leaving COVID Fears Behind and Gaining Altitude 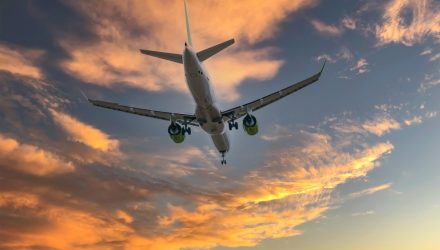 Airline ETF Could Be Leaving COVID Fears Behind and Gaining Altitude

The markets could be reaching the peak of their fear over airline industry concerns, and airline sentiment has the potential to improve, particularly heading into the busy holiday travel months. Investors can capture the new flight path with a targeted exchange traded fund.

In the recent webcast, Can Airline Investors Finally Remove Their Seatbelts?, Frank Holmes, CEO of U.S. Global Investors, underscored the resilience of the airline industry. Investors may draw similarities to what is happening now to what happened during other global crisis events. For instance, airline stocks rebounded in the following six months after the 9/11 crisis, surging more than 80%, and the sector climbed more than 120% in the six months after the SARS crisis. Airline stocks have so far recovered faster during the COVID-19 pandemic than in past crises.

Many have turned to airline stocks as a way to bet on the broad recovery of an industry that has been among the hardest hit by the coronavirus pandemic after global governments halted air travel in a bid to contain the virus. The play has also been a way for investors to bet against Warren Buffett, Berkshire Hathaway Inc.’s chief executive, who sold major stakes in the four biggest U.S. carriers last year, which may have cost him $2.7 billion. Airline stocks have climbed 80% since Buffett announced he was dumping airlines.

Holmes attributed the rebound this time around to the vaccination rollout that has helped bring back normalcy and contributed to pent-up demand for travel after people were cooped up at home during the shutdowns. For example, after 18 months, the U.S. relaxed its European travel ban. Canada also recently welcomed back fully vaccinated international travelers, and the increased travel has forced Canadian airlines to even ask for staff volunteers to cope with the travel surge.

“The White House’s vaccine mandate is good for airlines,” Holmes said. “A vaccinated populace is likely one of the fastest paths to ending the pandemic and getting back to normal life. This includes more travel.”

Holmes also pointed out that ancillary revenue, or revenue form non-ticket sources, has also helped airline companies expand their revenue stream. Globally in 2020, ancillary revenue is estimated to have earned airlines around $35 billion. This includes all the “extra” charges like meals, Wi-Fi, seat selection, and checked bags.

The airline industry is optimistic and has begun expanding operations to meet the projected increased demand ahead. For example, Southwest Airlines is set for a major new maintenance base in Baltimore. In addition, United added 270 Boeing and Airbus aircraft to its fleet, the largest order in the airline’s history and the biggest by a single carrier in a decade.

Investors have turned to the U.S. Global Jets ETF (NYSEArca: JETS) as a way to access the recovery in the global airline industry. JETS has also become a popular mechanism for many retail investors to gain diversified exposure to the airline industry as opposed to betting on single airliners. The airline ETF has seen significant inflows from deep-value retail investors and institutional investors, including hedge fund managers like Migdal Insurance & Finance, Morgan Stanley, LPL Financial, and more. These inflows have accelerated and hit record highs as an effective COVID-19 vaccine became available, pushing airline stocks higher.

JETS follows the U.S. Global Jets Index, which uses fundamental screens to select airline companies, with an emphasis on domestic carriers, along with global aircraft manufacturers, airport companies and internet media, or other services related to airlines.