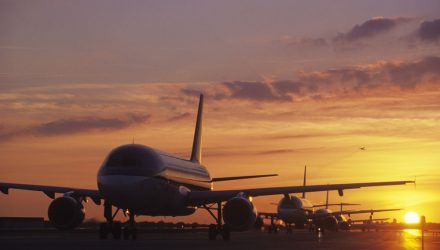 The airliner industry has pushed back above both its short-term and long-term moving trend lines, and the airlines-related ETF suddenly experienced a sharp tailwind after an industry leader revealed a more optimistic outlook.

While some may see this growth as a modest projection from its previous 2% to 3% growth range given just a month ago, investors should keep in mind that the previous guidance was given before the hurricane season’s Harvey, Irma and Maria barreled through the Gulf Coast and the Caribbean. All in all, Delta’s estimates look much rosier than many had previously anticipated in light of the devastation caused by the severe storm systems.

Delta revealed that Hurricane Irma by itself forced the airliner to cancel some 2,200 flights between September 7 through 12 at an estimated $120 million in lost opportunity cost to its third quarter pre-tax profit. Nevertheless, the financial cost was less severe than expected and provided a well-needed tailwind to a flagging airline industry.

On Demand Webcast: Why You Should Fly with an Airline ETF

Any negative impact from the hurricane season will likely be short-term in nature as the industry quickly readjusts. Looking past the effects of the hurricanes, Delta’s overall guidance was a positive for the industry and suggests pricing trends could stabilize after the short-term hiccup.