You are at:Home»Featured»Airbnb IPO Surging Higher on First Day of Trading 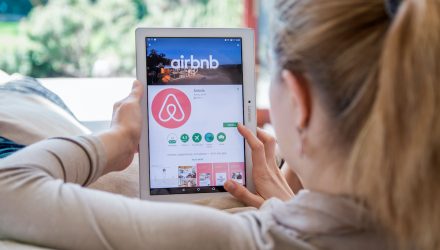 The IPO market has been heating up recently, and the latest famed entrant, Airbnb, trading under the ticker ABNB, opened at $146 per share on its first day of trading on Thursday, which was a greater than two-fold increase over the $68 per share price set for its IPO the prior day. The move may be helping to boost a well-known IPO ETF as well.

The opening price gave Airbnb a market value of more than $87 billion on a non-diluted basis. Shares have since surged even higher, as much 140%, bringing its market cap well over $90 billion.

While Airbnb’s commencement as a publicly traded company appears promising, its business has still suffered from the Covid-19 pandemic. Tourists and travelers around the world have stayed close to home and followed shelter-in-place mandates, resulting in a dearth of bookings for the company.

Airbnb’s revenue fell nearly 19% last quarter to $1.34 billion compared with the same period a year prior. But it still been able to generate a profit of $219 million and has had other intermittent quarters of profitability.

“Our financial results for the first nine months of 2020 were materially adversely affected,” Airbnb wrote in a November filing with the US Securities and Exchange Commission. “We expect that COVID-19 will continue to materially adversely impact our bookings, revenue and business operations in future periods.”

However, speculation that it would become a part of one of the major indexes in the next couple years appears to be fueling interest in the stock, a well-placed source told CNBC.

Investors Looking Toward Airbnb Potential in 2021?

Once travel picks up again, Airbnb is likely to garner even more profit, as travelers begin to venture out in greater numbers. Yet timing is uncertain.

“Now that people are coming to Airbnb, they don’t even necessarily have a destination in mind or dates, because they’re flexible. We’re all obviously on Zoom, and so people are saying, ‘I want to go anywhere 300 miles around me, what can you show me?’” Airbnb CEO Brian Chesky said. “Now we’re going to be getting a little bit more into the game of inspiration and matching people to the perfect home experience for them.”

“I don’t think I’m going to worry much more than in April and May when we saw our business drop 80% in eight weeks in the middle of a pandemic,” the CEO explained.

The travel company saw some issues arise when it received complaints from hosts on its platform early in the pandemic, as the AirbnB was more flexible with guest cancellations, which frequently left hosts bereft of the payments they had come to expect. A Texas-based host even filed a class-action lawsuit against the company last month, alleging Airbnb breached its contract with hosts by offering the refunds. Airbnb called the lawsuit “frivolous and without merit” in a statement at the time.

As part of its IPO, however, Airbnb has generated an endowment fund for hosts consisting of 9.2 million nonvoting shares it set aside.

“We want hosts to share in our success, not merely for a single moment in time, but for as long as Airbnb exists in the world,” the company wrote. “We intend the Host Endowment Fund to be a long-term investment in the future of our host community, to be shaped by hosts for hosts.”

Investors looking to trade Slack and other hot IPOs like Airbnb using ETFs can consider the Renaissance IPO ETF (NYSEArca: IPO), which holds rising stars like Moderna and recent successes such as Uber and Beyond Meat. The IPO has rocketed more than 154% since March of this year.

The Renaissance IPO ETF adds positions of the most significant U.S. listed companies after they go public. They are added on a fast-entry basis on the stock’s fifth day of trading or upon quarterly review. Positions are then removed after two years of trading.

On Thursday alone, IPO has rallied an additional 2.3%.