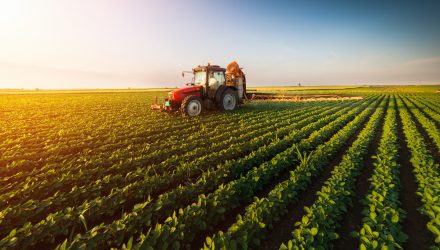 Agriculture-related exchange traded funds were among the leaders on Tuesday after the United States Department of Agriculture revealed a smaller-than-expected estimate on the acreage of planted corn for the year.

CBOT corn futures were 3.7% higher to $3.4075 per bushel while CBOT soybean futures were up 2.4% to $8.82 per bushel. Prices for a most-active corn contract haven’t traded or settled at levels this high since March, according to FactSet data.

“Corn acres were well below expectations. Producers moved into spring with a bearish market and lots of uncertainty,” Brian Basting, Analyst with Advance Trading, told the Financial Post. “We really did not see much of a transition of those acres over to soybeans, which were only up 300,000 from March. It’s a bit of a mystery.”

According to the USDA’s Acreage report, corn planted area in 2020 is expected to be 92 million acres, or up 3% year-over-year last year, MarketWatch reports.

The USDA’s numbers came in lower than the 95.207 million acres average guess for corn planted acreage by all analysts.

“Assuming trend line yield of 178.5 bushels per acre,” the forecasted acreage “trims the corn balance sheet by nearly a half a billion bushels,” Sal Gilbertie, president and chief investment officer at Teucrium Trading, said. “Corn is the king of the grain complex and with the near-record amount of shorts on the corn futures side, there is a pretty significant short covering rally occurring.”

The USDA previously projected in early March that farmers would plant 97 acres of corn, an eight-year high, and some 2.7% above the pre-report trade guess, which was among the biggest misses on record, Reuters reports.

The many unplanted acres, notably in North Dakota, and the potential switching to other crops such as soy to meet increased Chinese demand may have contributed to the shortfall in estimates. The smaller-than-expected plantings figures also helped offset pressure from favorable weather conditions that raised crop production expectations heading into July.