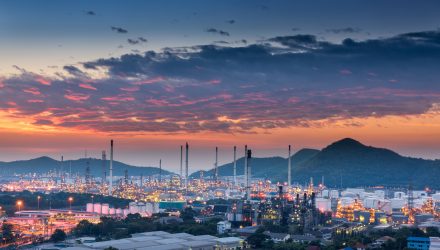 After Declines, Energy Sector Could be Attractive

The energy sector was one of the worst-performing groups in the S&P 500 in 2018, as highlighted by an annual decline of 18.20% for the Energy Select Sector SPDR (NYSEArca: XLE), the largest equity-based energy exchange traded fund.

“The more than 30% drop in oil prices from the 2018 peak has coincided with a period of weakness for broader equity markets, making energy stocks look much more attractive than they did when OPEC met in June,” said Morningstar in a recent note. “The median price/fair value in our global energy coverage is 0.77. Roughly 8% of our energy coverage trades in 5-star territory, among the higher shares at a sector level.”

“We said in June that a shale-induced supply surge would be the likely catalyst to sink oil prices toward our midcycle price,” said Morningstar. “This has largely played out, with U.S. production up 7.5% from June to September and more than 14% since the end of 2017. Other factors have contributed to the oil price decline since the last OPEC meeting, including higher-than-expected Iran production and demand worries as prices rose.”