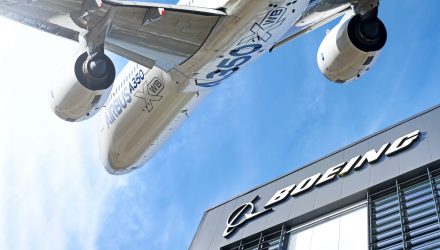 On Tuesday, Boeing shares surged and aerospace ETFs gained amid news that Amazon (AMZN) said it’s purchasing 11 used Boeing 767-300 jets from Delta and WestJet. The move happens as airlines struggle to reduce their fleets, in an attempt to mitigate lower demand due to the coronavirus. Amazon and related consumer ETFs gained slightly amid the news as well.

Amazon continues to strive for quicker delivery times, as the pandemic has fueled demand for online orders. Quarantined shoppers who are unable to visit brick-and-mortar facilities are looking to purchase essential and nonessential goods with expedient delivery.

The company has been gradually growing its fleet of planes focused to its Amazon Air cargo operations through leasing agreements, but Tuesday’s announcement is its first-ever direct aircraft purchase, Amazon said.

“Having a mix of both leased and owned aircraft in our growing fleet allows us to better manage our operations, which, in turn, helps us to keep pace with meeting our customer promises,” Sarah Rhoads, vice president of Amazon Global Air, said in a statement.

Boeing 767-300ERs values in mid-December fell about 15% compared with the beginning of 2020, according to Ascend by Cirium, an aviation consulting firm. Rob Morris, a consultant at Ascend, noted that the Delta aircraft roughly 20 years old and, if between major maintenance cycles, would be valued at close to $13 million to nearly $14 million each.

Shares of Boeing fell on Monday following an analyst downgrade, as the stock lost as much as 4.6% as investors digest the long recovery ahead for the aerospace giant.

Despite the downgrade, Boeing investors were energized to hear that a Boeing 737 Max aircraft ferried paying passengers on a U.S. flight last month for the first time since the planes were grounded and placed under heavy scrutiny in mid-March of last year, after deadly crashes killed almost 350 people in Ethiopia and Indonesia over a five-month time frame.

Investors looking to use ETFs to play Boeing can look at the iShares U.S. Aerospace & Defense ETF (ITA), which is 2.66% higher on Tuesday, the Invesco Aerospace & Defense ETF (PPA), or the U.S. Global Jets ETF (JETS). Meanwhile, those looking to invest in Amazon have a wide variety of ETFs to choose from, including ProShares Online Retail ETF (ONLN) and Fidelity MSCI Consumer Discretionary Index ETF (FDIS).