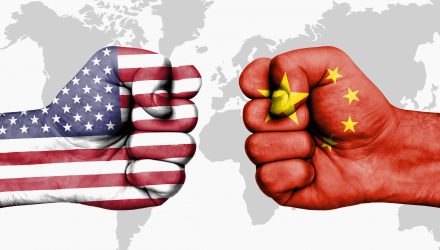 The continuous trade war rhetoric that has bounced between China and the Trump administration has seen mixed market results. While some companies have been performing remarkably well, the case is different for certain exchange traded funds (ETFs).

After the Chinese government stated that it would “retaliate forcefully” should the U.S. impose higher duties on the country’s products, the Industrial Select Sector SPDR ETF (NYSEArca: XLI) shed over $406 million on Tuesday, the most it has since April, according to Bloomberg. XLI seeks to provide exposure to companies within the industrial sector of the S&P 500 Index, with its top holdings including Boeing, 3M, GE, Union Pacific, Honeywell, and Caterpillar.

On the other hand, the iShares Russell 2000 ETF (NYSEArca: IWM), the biggest ETF tracking small- and mid-capitalization stocks, has seen “its largest cash infusion since March, taking in $641 million.” This is likely because smaller companies are often more domestically-oriented and are seen as a safe bet since much of their income is made within the U.S. IWM has seen a YTD return of 10.90%. The fund’s top holdings include Grubhub, Sarepta Therapeutics, Bluebird Bio, and Aspen Technology.

Emad Mostaque, Co-CIO at Capricorn Fund Managers, appeared on Bloomberg TV to share his thoughts on the trade war’s effects on the market. See the full clip below: