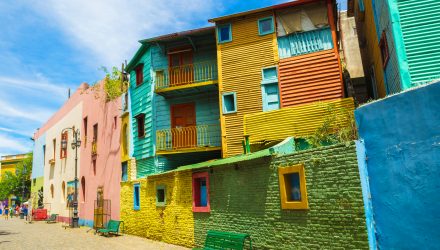 In what has been a rough year for broader emerging markets benchmarks, exchange traded funds tracking Latin American markets are being repudiated. For example, the S&P Latin America 40 Index is down more than 12% year-to-date.

Smaller, investable Latin American markets such as Argentina along regional giants Brazil and Mexico are tumbling. The Global X MSCI Argentina ETF (NYSEArca: ARGT), the largest US-listed exchange traded fund tracking Argentine equities, is sporting a double-digit loss over the past month. That even after Argentina’s central bank boosted interest rates to 60% and the International Monetary Fund (IMF) provided a financial bailout.

“The region’s two largest economies–Mexico and Brazil–have elected or are likely to elect populist presidents,” said BlackRock in a recent note. “Argentina is struggling with a massive financial squeeze and a run on its currency. Venezuela’s terrible humanitarian crisis has led to riots and massive emigration into neighboring countries.”

Despite the difficulty in predicting the next president, there are still constructive drivers that should benefit stocks over the next few months. For instance, J.P. Morgan expects Brazil to post the best corporate earnings growth in 2018 among Latin American peers. Additionally, a number of its industries are linked to commodities, which benefit from a weaker real currency.

“We routinely forget that Brazil is the size of the continental United States. And, similarly, it has a vast array of sub-economies and growth opportunities dispersed across a large landmass,” said BlackRock. “All of our panelists agreed that Brazil currently appears to represent Latin America’s most attractive investment opportunity. Despite the political turmoil (former president Lula da Silva is campaigning from prison), the central bank has managed to keep the currency relatively stable and inflation within a reasonable range.”