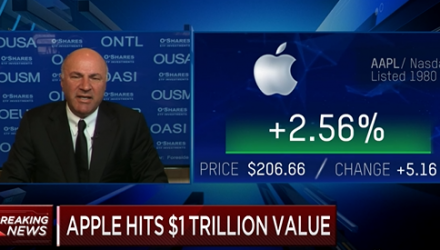 Shares of Apple crossed the $1 trillion market capitalization mark on Thursday, causing investors to board the tech giant’s titanic boat party to rejoice, but Canadian businessman and “Shark Tank” television personality Kevin O’Leary shouted down the celebration with a warning of a potential iceberg ahead–in particular, the stock’s high price-to-earnings ratio.

Apple is the first publicly-traded U.S. company to break through the $1 trillion market capitalization barrier, but in addition to O’Leary, some investors worry that its current valuation is a precursor to a significant drop ahead. For O’Leary, a decline could rear its ugly head if Apple is unable to sustain innovation of its popular iPhone.