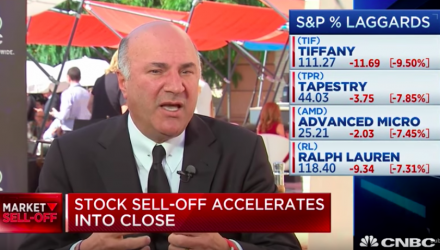 Kevin O’Leary Says US Core Economy Is On Fire

O’Shares ETFs Chairman Kevin O’Leary is still optimistic about the strength of the underlying U.S. economy – and he told CNBC on Thursday why he’s still bullish and where his money is going now.

O’Leary, who appears on ABC’s Shark Tank, said it’s fair to look at large-companies and say that they should have some exposure to the volatility of the rest of the world.

“47 percent of the S&P 500’s earnings come from overseas markets, notably Asia which is having a massive correction and Europe which is slowing down a little bit,” O’Leary said. “Obviously the German numbers over the past three months are slower than people anticipated, and it’s starting to be reflected in some of their debt. I still look at that and say to myself, okay, I’m going to own those companies because of their sheer scale and growth and dividends.”

O’Leary noted there is added volatility in the markets because there is some concern about China and other markets, but added the U.S. markets are still strong.

“The companies in this country that don’t sell abroad, which have a lot of their import costs in questions, which is one of the reasons small-caps are correcting, people are worried about tariffs affecting import costs,” he said. “I have over 30 of them now, in almost every state, the last two quarters, I’ve never had anything like this in my life. We’re hitting on every cylinder we’ve got.”