You are at:Home»Advisor Solutions Channel»Kevin O’Leary on Apple Stock: ‘I Don’t Own It Anymore’ 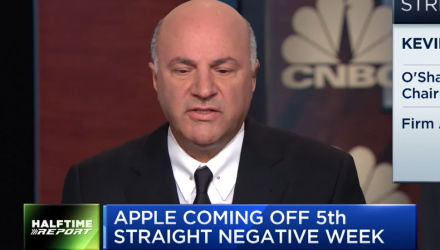 Kevin O’Leary on Apple Stock: ‘I Don’t Own It Anymore’

Ben Hernandez November 5, 2018
Five years ago, famed “Shark Tank” television personality Kevin O’Leary took a large bite out of tech giant Apple, but it appears his iTune has changed. The Canadian businessman told CNBC that he no longer owns the stock as a result of the company’s evolving transparency or lack thereof.
“The narrative on Apple–five years ago, I got into this stock with the story that services and software subscriptions were 2% of revenue, and that they were going to bring in a whole series of innovative, what I call Trojan horses, into the market so people would buy iPads, buy laptops and buy iPhones, and slowly, buy more and more services,” O’Leary said.
Last week, despite beating earnings and revenue expectations for its fourth fiscal quarter last week, murky forecasts for iPhone sales caused investment firm Rosenblatt Securities to downgrade the stock. Rosenblatt Securities, the second firm to issue a downgrade, changed their rating from “buy” to “neutral,” citing that higher iPhone prices won’t offset a weaker sales volume.
Bank of America Merrill Lynch issued a similar downgrade following the earnings report for “slower growth in app store revenue, especially in China; guidance for the December quarter that implies weaker-than-expected iPhone unit sale; investors will likely interpret ending iPhone unit sales figures as negative; and weaker growth in emerging markets because of the stronger dollar.”
However, the company also said it would no longer report how many iPhones, iPads or Macs it sells–that changed it all for O’Leary as he was listening to the earnings call.
“They say, ‘We’re not talking about unit sales anymore,'” said O’Leary. “What do you mean you’re not talking about unit sales? You’re a closed environment. The only way you get back into Apple on a service basis is ‘You got to buy one of these (iPhone) things and if I don’t know how many you’re selling, I don’t know anything about you anymore.”

“Seconds after that I exited the stock,” O’Leary added. “It’s going to take a lot to get me back in.”

Related: Midterm Elections Could Be a Turning Point for Stock ETFs

O’Leary was already wary of Apple as its shares crossed the $1 trillion market capitalization mark during the thick of the extended bull run in the summer, causing investors to board the tech giant’s titanic boat party to rejoice, but O’Leary was wary of Apple sustaining its performance given certain metrics–in particular, the stock’s high price-to-earnings ratio.