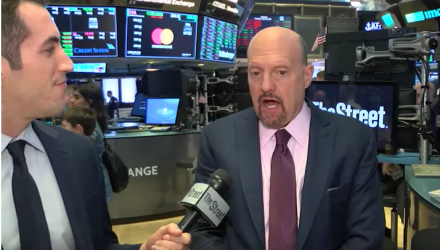 Escalating trade tensions between the United States and China precipitated a plunge that caused the Dow Jones Industrial Average to open on the down side at Monday’s market open to the tune of over 200 points. While the influx of news regarding the tariff battles between the two economic superpowers flooded the news feeds, founder of TheStreet and host of CNBC’s Mad Money Jim Cramer was having none of it.

“The news flow that we’re getting is out of proportion with how things are,” said Cramer. “The news flow seems to be about how it’s not okay if our country does well if other countries do poorly.”

Cramer proceeded to paint a rosier picture based on what Twitter followers have been tweeting him when he asked them to send him positive news to counteract the negativity in the markets.

If anyone has a SINGLE positive about ANYTHING please tweet. Just ONE positive thing…

“There’s been an outpouring of people talking about how their kids are getting jobs and their gardens are coming, the weather’s good, and the (Philadelphia) Eagles have nice (Super Bowl) rings,” said Cramer.

As of 2:10pm Eastern Daylight Time, the Dow has trimmed its losses down to 120 points, but Cramer wants more of the positive.