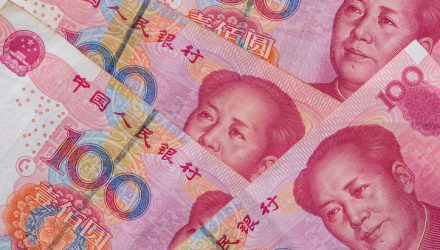 Bloomberg announced that it will be adding Chinese RMB-denominated debt to its Bloomberg Barclays Global Aggregate Index over a 20-month period starting April 2019, according to a note.

Once fully implemented, local currency Chinese bonds will make up the fourth largest currency component in the Global Aggregate Index, following the U.S. dollar, euro and yen. Based off January 31, 2018 data, the index would include 386 Chinese securities or 5.49% of the $53.73 trillion index.

“Today’s announcement recognizes China’s continued efforts over recent years to enhance access to the world’s third-largest bond market,” Michael Bloomberg, founder of Bloomberg LP and Chair of the Working Group on U.S. RMB Trading and Clearing, said in a note. “It is a testament to China’s firm commitment to financial reforms and the pace of change taking place in its bond market, and another important step for China’s integration with global financial markets.”

“Bloomberg’s inclusion of RMB-denominated bonds in the most widely-used fixed income benchmarks represents a pivotal development for investors around the world,” Henry M. Paulson, Co-Chair of The Working Group on U.S. RMB Trading and Clearing, said in a note. “China’s new position in international bond portfolios will pave the way for robust market activity and support continued financial reforms.”