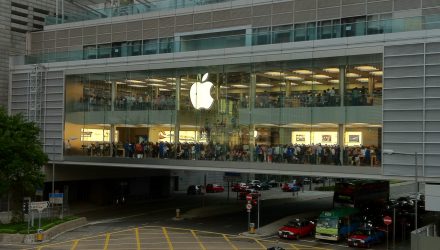 Tom Lydon November 5, 2018
Despite beating earnings and revenue expectations for its fourth fiscal quarter last week, murky forecasts for iPhone sales caused investment firm Rosenblatt Securities to downgrade the stock, causing shares to fall by 3.62% as of 11:00 a.m. ET.
Exchange-traded funds (ETFs) with the largest capital allocations to Apple were down–Technology Select Sector SPDR ETF (NYSEArca: XLK), Vanguard Information Technology ETF (NYSEArca: VGT) and iShares US Technology ETF (NYSEArca: IYW). XLK fell 1.27%, VGT slid 0.69% and IYW was down 0.98%.
Rosenblatt Securities, the second firm to issue a downgrade, changed their rating from “buy” to “neutral,” citing that higher iPhone prices won’t offset a weaker sales volume. Bank of America Merrill Lynch issued a similar downgrade following the earnings report for “slower growth in app store revenue, especially in China; guidance for the December quarter that implies weaker-than-expected iPhone unit sale; investors will likely interpret ending iPhone unit sales figures as negative; and weaker growth in emerging markets because of the stronger dollar.”
“Calendar fourth-quarter guidance reflects our cautious view on weaker than expected sell-through and production reductions for iPhone XS/XR,” said analyst Jun Zhang. We “downgrade to neutral.”
Last week, Apple reported that it posted a quarterly revenue of $62.9 billion, which represented a 20% jump from the same time a year ago, as well as, a quarterly earnings per diluted share of $2.91–a rise of 41%.
“We’re thrilled to report another record-breaking quarter that caps a tremendous fiscal 2018, the year in which we shipped our 2 billionth iOS device, celebrated the 10th anniversary of the App Store and achieved the strongest revenue and earnings in Apple’s history,” said Tim Cook, Apple’s CEO. “Over the past two months, we’ve delivered huge advancements for our customers through new versions of iPhone, Apple Watch, iPad and Mac as well as our four operating systems, and we enter the holiday season with our strongest lineup of products and services ever.”

Shares of Apple crossed the $1 trillion market capitalization mark during the thick of the extended bull run during the summer, causing investors to board the tech giant’s titanic boat party to rejoice, but Canadian businessman and “Shark Tank” television personality Kevin O’Leary shouted down the celebration with a warning of a potential iceberg ahead–in particular, the stock’s high price-to-earnings ratio.

Related: Healthcare ETFs in Focus Ahead of Election Day

Apple was the first publicly-traded U.S. company to break through the $1 trillion market capitalization barrier, but in addition to O’Leary, some investors worry that its valuation was a precursor to a significant drop ahead, which is now materializing. For O’Leary, a decline could rear its ugly head if Apple is unable to sustain innovation of its popular iPhone.