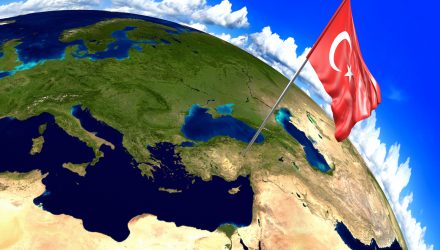 On heavy volume, the iShares MSCI Turkey ETF (NasdaqGM: TUR) sank nearly 11% Monday, extending a slide that is sending shockwaves throughout the emerging markets space while taking TUR to a new 52-week low.

While Turkey’s economic crisis, one that has seen its lira slide to record lows against the dollar, has investors pensive about emerging markets equities, one emerging markets single-country exchange traded fund is still luring investors. That fund is the iShares MSCI Malaysia ETF (NYSEArca: EWM).

“The Southeast Asian nation’s stock market surged into overbought territory last week and the sole U.S.-listed exchange-traded fund tracking the measure attracted the most cash since 2011. The rally came as investors in developing-nation assets fretted over whether Turkey’s plunging currency would spark a selloff in other countries,” according to Bloomberg.

Investors may be embracing EWM as a low volatility way to wait out the Turkish turmoil. EWM has a three-year standard deviation of 17.16%, more than 900 basis points below the comparable metric on the aforementioned TUR.