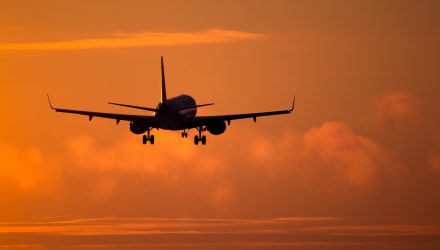 The news comes as the Dow Jones Industrial Average fell over 600 points on Thursday as shares of iPhone maker Apple declined 10 percent on a weak first quarter guidance.

Delta issued a warning to investors that its previous forecast of 3.5 percent unit revenues would fall short by a half a percent when it reports earnings later this month. This caused shares of other airlines, such as American Airlines, United Airlines and Southwest Airlines to fall in unison.

Meanwhile, JETS, the ETF with one of the largest percentage allocation towards Delta Air Lines at over 12 percent lost 4.35 percent on Thursday. JETS tracks the performance of the U.S. Global Jets Index and relies on a passive management strategy that invests in U.S. and international passenger airlines, aircraft manufacturers, airports, and terminal services companies across the globe.

Oil prices have fallen as of late, but with that drop comes cheaper fuel prices, resulting in airlines having to compete for market share by dropping their fare prices–a negative notion for investors.

Related: Airline Stocks, ETF Could Fly Into the New Year