You are at:Home»Active ETF Channel»Gauging The Uncertainty Added From A Presidential Election 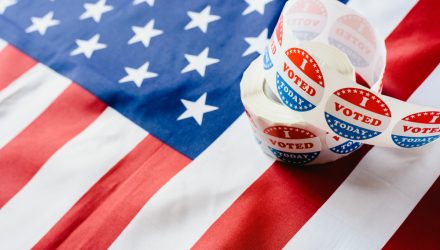 Gauging The Uncertainty Added From A Presidential Election

In such an unprecedented year when it comes to the wild shifts it has taken, it’s not as though 2020 is about to quit before a critical general election occurs. Investor concerns are running high in an election year already abounding with tension amid the Coronavirus pandemic’s economic damage. As a result, there is an ample amount of market uncertainly tied to the varying differences between the candidates.

These salient policy differences between the presidential candidates could have important meanings for investors, particularly when it comes to taxation. Specifically, with Democrat Joe Biden’s proposal to raise corporate taxes, as reported from an article by T. Rowe Price, while these tax hikes could reduce after-tax corporate earnings, “it’s unclear whether current equity and corporate bond prices are discounting the possibility of a Biden win and higher taxes.”

While a tax hike would not necessarily hold back growth, as evidenced by the broader economic growth that occurred following tax hikes made during the Clinton and Obama administrations, it does speak to how the build-up to the election means the market cannot reconcile with these decisions until after, leaving an open question in regards to how to react in the meantime before any proposed changes can take hold.

In addition to taxation, T. Rowe Price investment professionals have provided their views on potential implications for the IT, health care, financials, industrials, and energy sectors, further speaking to the uncertainty and possible volatility to track alongside the path to the election. In regards to municipalities, “This partisan dynamic means that the election outcome could help determine the credit quality of municipal debt for years to come as the economy recovers from the pandemic,” says Mark Vaselkiv, T. Rowe Price’s CIO.

Sector Struggles All Over

Healthcare is another major area of difference. The risk of a dramatic overhaul of the health insurance market diminished following Biden’s securing of the Democratic nomination. However, there is still a major difference in philosophies between the two candidates that cannot be currently issued, given where things are at this time.

As for financials, “A Biden administration might seek to impose stricter rules and enforcement for banks, while a second Trump term could lead to further financial deregulation.” However this shakes out, the regulatory environment may prove less adversarial, compared to the situation following the 2008 financial crisis.

One area that likely won’t stop growing rapidly regardless of the election’s outcome is deficit spending. Regardless of a tax increase, T. Rowe Price Chief U.S. Economist Alan Levenson believes federal deficits will remain high no matter who is president.

There also seems to be little to be concerned with election-wise when it comes to sector fundamentals, which are more likely to be driven by the economy’s ongoing digitalization. According to Ken Allen, portfolio manager of the T. Rowe Price Science & Technology Fund, “Regardless of who wins the presidential election, the mega‑cap U.S. technology companies are likely to remain in the regulatory spotlight both at home and in Europe.”

All of this, and there is still energy and industrials to consider. However, even with the election, other factors remain key in the coming months when measuring market potential. Most notably, major waves of Covid-19 infections could easily contribute heavily to a disruption of the global markets at any time. That said, breakthroughs in treatments could lead to a rally in stocks and corporate bonds.