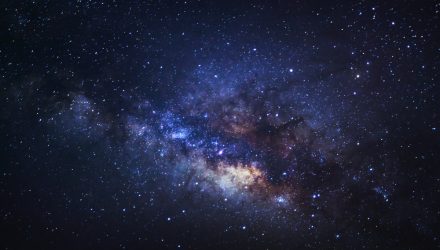 The ARK Space Exploration ETF (ARKX) is about a month old, and due to some rapid asset gathering, it’s already one of the shiny new objects in the ETF arena.

The newest ETF from ARK Investment Management is also another boon for active management, confirming that thematic approaches that excelled in the passive wrapper can also captivate investors in active form.

The issuer defines space exploration as “as leading, enabling, or benefitting from technologically enabled products and/or services that occur beyond the surface of the Earth.”

An interesting element of the ARKX equation is that it joins a growing number of new ETFs holding special purpose acquisition companies (SPACs). SPACs, or blank check companies, provide efficient, less time-consuming routes for firms to go public relative to the traditional initial public offering (IPO) process and. Since early 2020, this option has permeated hyper growth segments, including space exploration.

While it remains to be seen if ARKX will hold more blank check companies, some analysts see space investing as fertile territory for SPACs – a theme that’s already playing out today.

“Until the start of XXI century the space industry was dominated by a few large players due to extremely high entry cost. Around a decade ago, when satellite financing was eased, more countries invested in launching their own satellites –these were rarely needed to provide television services, but rather used for various Earth observation purposes,” notes IHS Markit.

As an industry, space is still in its formative stages, but it’s complicated and capital-intensive – the latter point potentially underscoring why the SPAC route is appealing to some companies.

“The space industry is complex, requires excellence in engineering and, due to high capex, does not forgive mistakes. It is very capital heavy, and several satellite businesses entered Chapter 11 in 2020,” added IHS Markit. “Let us not forget also that even though space offers various advantages, terrestrial (including mobile) networks are also seeing innovation and continue to be upgraded.”

For many investors, ARKX’s active approach and broad basket could prove prudent over investing in individual companies, including SPACs.

“There are many pros and some cons for investing into the space segment. It’s only the beginning of space explorations and once we get up there, a whole additional level of activity will be needed to support what is going on,” concludes IHS Markit.