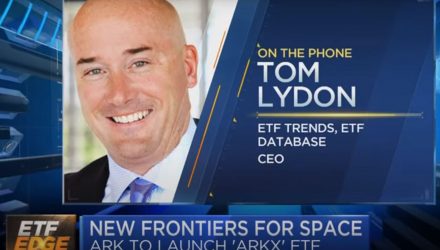 Following an understanding from Wood that the costs associated with launches, rockets, antennae, etc., she also notes how the private sector has helped NASA by pushing the envelope and making the technologies more readily available. With that in mind, there’s still plenty of speculation as to what companies could be included in the fund.

Lydon notes how other funds, such as the Autonomous Technology and Robotics ETF (ARKQ), has a couple of companies that specialize in unmanned systems and satellites, including Kratos Defense and Security Solutions (KTOS) and Trimble (TRMB), which has a water management software aided by satellites. This reasoning leads him to believe Wood will likely feature several similar companies into ARKX as well.

Lydon also notes how the ETFs touching on this area tend to vary, whether it’s in their construction or strategy. Looking at something like the Procure Space ETF (UFO), which is earnings focused. That’s the premise for the components of that ETF. In contrast, the SPDR Kensho Final Frontiers ETF (ROKT) is more growth-oriented. It all just shows how there will be plenty of ways to play things in this sector.

Other factors, such as manufacturing types, are also of concern. SpaceX, in particular, is a private company that has continued to get serious funding, making it a bit of an unknown variable. However, Bartolini feels space exploration is also an opportunity for more than just high-flying names. There are companies in the public markets that are helping to supply them.

Bartolini notes, “There are three catalysts that are mutually reinforcing the opportunity right now. There’s more efficiency. Also, more government support from the defense department has increased the budget related to space investments over the past three years. And there are more commercial applications here down on earth in terms of satellite technology.”

Thanks to those components found in public markets, that’s where the effort goes as far as what to seek out with ROKT, let alone other funds, which people should be aware of.