You are at:Home»ETF Strategist Channel»A Reversal of Fortunes: Sizing Up 2017 ETFs 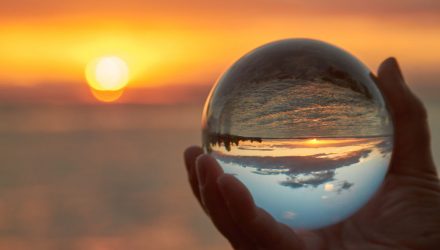 A Reversal of Fortunes: Sizing Up 2017 ETFs

Markets have continued their strength from 2016 into 2017, as the S&P 500 ETF (SPY) is up 9.17% through June 30th. More importantly, the longer-term trend towards growth stocks has returned.

Following the 2016 election, small cap and value stocks surged on expectations of a major tax cut and stimulus that might come out of a Trump administration. However, this trend reversed after what was a strong rally lasting only one month after the November election. The size of the gap between growth and value is quite startling. The S&P 500, mid cap, and small cap value ETFs (IVE, IVOV, and IWN) are up 4.67%, 3.41%, and 0.30% through June 30th. In contrast, the S&P 500, mid cap, and small cap growth ETFs (IVW, IVOG, and IWO) are up 13.15%, 8.52%, and 9.86%. Sector performance plays a large role here, as growth-oriented Technology and Health Care performed well while value-oriented Financials and Energy faltered.

Large cap stocks in general have been strong performers this year, and one factor driving this is the U.S. dollar, which has seen consistent weakness in 2017. A weaker dollar means that foreign profits increase due to foreign currency translation, and this development often helps large cap exporters. What perhaps is understated is how much this helps U.S. markets as a whole. Just under half of the S&P 500 sales are made abroad, and the weakness in the dollar has offered a substantial boost to those numbers. International economies, particularly those in Europe and Asia, have produced stronger growth this year than over the prior several quarters and, as a result, international stocks (and those U.S. companies with a high percentage of international sales) have been the winners.

The last important development that we would point to regarding markets this year is, of course, interest rates. The Fed raised rates three times over the past year, in December, March, and June. Expectations for another rate increase this year have been falling dramatically as growth has remained modest and inflation very much under control. What is most noteworthy is the flattening of the yield curve in 2017. While the Fed increased rates two times this year, the 10-year Treasury yield has declined. The spread between 2-year notes and the 10-year Treasury has fallen from 125 basis points to 91 basis points so far this year. Further interest rate increases are expected to be very gradual, and inflation remains under control. We continue to believe that we are in a slow growth, low inflation world.

The equity portion of the Navigator® Multi-Strategy portfolios invests entirely in U.S. equities, emphasizing those style boxes and factors displaying the most relative strength (and avoiding those that are not). The portfolio re-oriented itself towards the longer-term trend favoring growth during the quarter. Large cap growth and momentum dominate the portfolio’s holdings, and there is no doubt that the solid performance among Technology stocks is the primary driver of the changes along with a lesser contribution from Health Care. Weakness in Energy and Financials led value stocks to underperform. Later in June, growth and Technology stocks were hurt by a sell-off driven by valuation concerns. Our models are watchful for a meaningful reversal of the bullish trend in Technology and thus growth. The trend was overdue for at least a consolidation, and we are mindful that market leaders are perhaps particularly prone to brief, sharp corrections. Our models remain watchful for a deeper intermediate-term trend change but we see no evidence of that yet.

The fixed income portion of the Multi-Strategy portfolios engages in asset class rotation within fixed income, owning high-yield bonds, Treasuries, or cash, whichever our model determines has recent trends in its favor. The strategy is effected via the Navigator Tactical Fixed Income Fund (NTBIX).

The portfolio has favored high yield for well over a year now, ever since February 29th, 2016, and high yield has delivered solid performance, particularly relative to U.S. Treasuries. Given the strong performance, high yield is now richly to extremely richly priced compared to long-term historical averages.