You are at:Home»Equity ETFs»8 Tesla ETFs Slump Amid Mounting Concerns 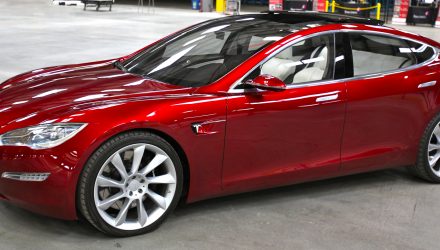 Moody’s Investors Service lowered its credit rating on Tesla yesterday stating, “Tesla’s ratings reflect the significant shortfall in the production rate of the company’s Model 3 electric vehicle,” Moody’s said. “Tesla’s rating could be lowered further if there are shortfalls from its updated Model 3 production targets.”

Let’s take a look at how the top 8 ETFs with Tesla exposure are performing today as of 12:30 Eastern time via Yahoo Finance data.

8 ETFs With Tesla Exposure All Down

According to Venture Beat, “The latest warnings follow the company’s troubled production of its Model 3, an issue that has raised questions about its ability to hit its targets this year. But beyond just hitting financial expectations, ratings agency Moody’s issued a grim downgrade this week, saying the company is going to have to raise $2 billion in the coming months.”

Pulling that  off will likely depend on Tesla proving it can hit its lowered Model 3 production targets for this quarter and the next.