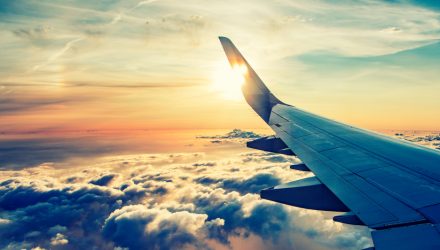 5 Reasons Airline Stocks Could Be a Buy in 2021

There’s no doubt 2020 was a rough 12 months for airline stocks. The NYSE Arca Global Airlines Index lost more than 31% over the course of the year as several major carriers reported record losses.

From a value investor’s perspective, this means the industry is on sale at a deep discount. Commercial aviation still has some challenging times ahead of it, but I believe the worst is behind us, meaning now may be an opportune time to get exposure.

Below are five reasons why I think airline stocks could be a buy in 2021.

1. Globally, new virus cases are starting to roll over.

Worldwide, new daily cases of infection appear to be declining, according to data from John Hopkins University. From its peak in January, the seven-day rate has slowed to its lowest level since early November. In the U.S., the number of total daily hospitalizations has also been falling pretty steadily since early January.

Not every country’s cases are dropping, though. Hotspots include Southern and Central Europe—particularly Portugal, Spain and Italy—and South America.

New variants of COVID-19 are also concerning and could contribute to a longer delay in the airline industry’s recovery.

The good news is that the vaccines already being distributed so far appear to work against the mutations.

2. Vaccine distribution in the U.S. is about to ramp up.

I was fortunate enough to receive my first dose of the vaccine last month—I shared my experience with Kitco’s David Lin, which you can watch here—but too many Americans have hit roadblocks trying to get theirs.

That may be set to change in the coming weeks and months. The Biden administration said recently that it would be sending a minimum of 10.5 million doses of the vaccine per week for the next three weeks across of the U.S. Starting next week, many of these doses will be going directly to pharmacies such as CVS and Walgreens.

The hope is that by the end of summer, 300 million Americans will have been fully vaccinated against the virus. As of Monday, some 26.5 million people had already gotten their shots, so I believe this goal, while ambitious, is achievable.

This makes me incredibly bullish of summer travel demand in general and commercial air demand specifically. Getting exposure now to beaten-down carriers could pay off later when vaccinated, travel-starved families start booking flights for summer vacation.

3. Airlines’ ancillary revenues actually increased in 2020 on a per-passenger basis.

I’ve written about the importance of airlines’ ancillary revenues before. These are the fees that passengers choose to pay for add-ons like extra baggage, assigned seating, credit cards and more.

Between 2010 and 2019, revenues from such services consistently grew year-over-year as people became more willing to pay extra for a more comfortable flying experience.

It should surprise no one that the pandemic squeezed this revenue stream. Total global ancillary sales plunged 47% in 2020 to an estimated $58.2 billion, from $109.5 billion a year earlier.

What may surprise you to know, however, is that ancillary revenues actually rose for the year on a per-passenger basis, according to research from IdeaWorks and CarTrawler.

United Airlines’ fees rose the most, from around $41 per passenger in the third quarter of 2019 to as much as $65 in the same quarter a year later—representing an remarkable increase of 59%. Alaska, Southwest, Air Canada, Ireland’s Ryanair and Hungary’s Wizz Air also saw double-digit growth.

Writes Aileen McCormack, CarTrawler’s chief commercial officer, this increase suggests that “an outstanding customer experience is not only recession-proof, but also pandemic-proof.”

One carrier in particular is attributing ancillary revenues to its profitability in 2020. VietJet Air, a low-cost international carrier operating in Vietnam and one of the very few to make money during the pandemic, reported an after-tax profit of $3 million last year after moving to boost its cargo capacity and ancillary services.

4. Leisure travel is expanding in China, Australia and other regions that have successfully contained the virus.

China is the only major economy to report economic growth in 2020, and its domestic commercial aviation industry has rapidly rebounded following stringent lockdowns in early 2020. (International flights are another story.) As such, I believe the country serves as an interesting model of what we may be able to expect here in the U.S. and elsewhere once we get the virus under control.

As you can see above, the number of seats offered on domestic flights in China quickly rebounded, eventually surpassing 2019 levels by late summer/early fall. Despite a slowdown at the start of this year, they’re still well ahead of other regions on a relative basis.

Looking ahead five to six months, consultancy group Bain & Company sees China’s aviation industry recovering the fastest among other G-20 nations. By the end of July, the country’s airline passenger volume is projected to be at 90% of pre-pandemic levels. Compare that to the U.S., which is projected to be at 57% capacity relative to 2019.

Meanwhile, the CEO of India’s low-cost carrier IndiGo is optimistic that travel demand will return to pre-pandemic levels by the end of this year. “I think we should be at 100% of domestic capacity by April at the latest,” Ronojoy Dutta told CNBC this week. “International will open slower, but by the end of calendar year 2021, we should be at pre-COVID levels internationally as well.”

One of the surest signs that companies are betting on a turnaround in business conditions is when they start expanding and making capital investments. While certainly not all airlines are in expansion mode right now—in fact, too many are still having to make dramatic spending cuts—I’m seeing a number of corporate decisions being made that give me optimism.

For one, airlines are beginning to add new routes to their networks to take advantage of voids left by competitors due to the pandemic.

This is precisely Southwest’s strategy. The Dallas-based carrier is pushing into two large airports, Chicago’s O’Hare International Airport and Houston’s George Bush Intercontinental Airport, both historically dominated by rivals United and American. For the first time in five years, United will be returning to New York’s John F. Kennedy International Airport this year, having already adding over a dozen new flights, including one from Denver to Belize City, Belize.

Incredibly, some carriers are hiring new pilots at this time, including American’s PSA Airlines and low-cost Frontier Airlines.

Other carriers, meanwhile, are making capital investments, including taking delivery of new aircraft. JetBlue has just unveiled a revamp of its popular luxury Mint suites, allowing passengers to make transatlantic flights for the first time in comfort and style.

As for new aircraft, travel analytics firm Cirium expects the recently ungrounded Boeing 737 Max to see its best years following a dismal 2020. Says Cirium’s Max Kingsley-Jones, “Boeing is aiming to ship around half of its surplus of undelivered aircraft during 2021 and most of the remainder through 2022, with the pre-built backlog fully cleared during 2023.”

Keep in mind that airline stocks, particularly now, can be highly volatile compared to the broader market. The daily volatility, or standard deviation, of airline stocks is ±4%, versus ±1% for the S&P 500 Index.

Originally published by US Funds, 2/4/21