CLS Investments is a top 10 holder in more than 50 different ETFs, many of which are new (and potentially small), but well vetted strategies with enormous potential. While the world of ETFs is still reasonably manageable, we believe investors should scour the available universe for undervalued asset classes. This can be uncomfortable, but highly rewarding. Let’s look at a few obscure examples that likely have flown under the radar of many ETF users.

Some readers may just close their browser window right here. Retail? Retail?! This fund was launched about a year ago and, as many would expect with the Amazon onslaught, has not gained assets. However, the ETF tracks an interesting index. It weights securities in the retail industry by trailing 12-month volatility, valuations (cash flow to price) and several momentum measures. This helps to weed out some of the value traps in the space (there are many) and focus on the more attractive names, such as those that actually generate positive cash flow. From a valuation standpoint, although not explicitly screened that way, it looks attractive relative to the rest of the world on a price-to-earnings, price-to-sales, and price-to-cash flow basis. And for what it’s worth, it has a 4% weight in Amazon as of this writing. 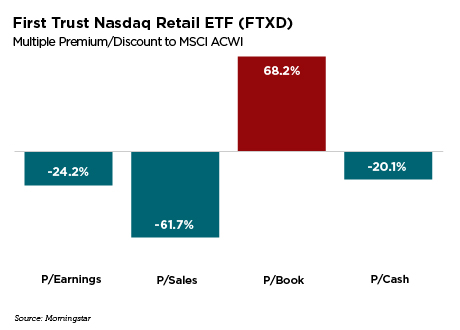 What if I told you there was an energy sector ETF up almost 25% this year? And, that it had less than $10 million in assets? Well, there is. The VanEck Vectors Oil Refiners ETF (CRAK) allocates to energy companies largely involved in crude oil refining. Most large conglomerates also have refining or downstream segments, but they are excluded from this ETF. Surging prices for distillates, such as gasoline, jet fuel, and heating oil (in large part due to hurricanes), have propelled this ETF to a terrific return in 2017. Despite the strong return, holdings are still remarkably cheap. Trading at substantial discounts in all four metrics we include here. Dare I say . . . buy some CRAK?