You are at:Home»Equity ETFs»3 Japan ETFs Look Like Bargain Picks 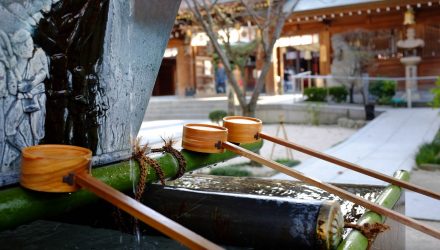 Bargain hunters may be looking back into Japanese markets and Japan ETFs after the trade war speculation rocked global markets and fears begin to abate.

Meanwhile, the unhedged iShares MSCI Japan ETF (NYSEArca: EWJ) was up 1.3% on Tuesday.

Investors’ concern over a potential trade war between China and the U.S., the two largest economies in the world, waned on reports that Beijing and Washington D.C. have begun negotiating a resolution.

“I believe China and U.S. both have the intelligence to resolve the issue” through talks and business rules, Chinese Premier Li Keqiang told top U.S. and other foreign executives on the sidelines of the China Development Forum, MarketWatch reports.

Meanwhile, hedge funders and institutional investors are beginning to look at Japan as a cheap play after the recent selling. Bullish traders argue that valuations in Japan are more attractive than in the U.S. as corporate profits improve, Bloomberg reports.