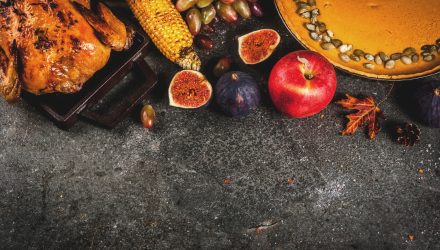 3 ETFs to Consider for Thanksgiving Week

The Thanksgiving holiday arrives next week and with comes a shortened trading week. While the Thanksgiving trading week is abbreviated, the S&P 500 historically performs well around the holiday and there are sector-level opportunities for traders of exchange traded funds to consider.

Historical data suggest the aerospace and defense and retail sectors are among the groups that perform well around the Thanksgiving holiday. If that scenario holds true, it could bring needed relief for the SPDR S&P Retail ETF (NYSEArca: XRT), the largest retail ETF, which has been struggling for much of this year.