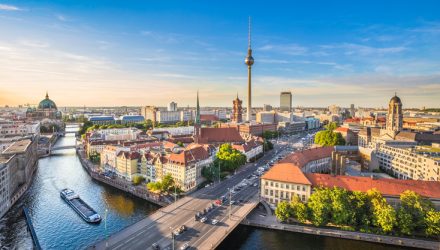 Europe-related exchange traded funds have largely underperformed U.S. markets for many years, but things are finally turning around as European equities begin to pull ahead this year.

“After underperforming US equities for the better part of this decade, Europe has rebounded strongly in 2017. Many investors with a ‘once bitten, twice shy’ mentality to international investing may have missed the story underpinning this outperformance,” BlackRock strategists said in a note.

After European exchange traded products experienced $34 billion in outflows over 2016%, the ETPs have attracted $20 billion in inflows globally this year, reflecting the growing interest for Europe-related assets on increased concerns over valuations in domestic U.S. markets.

According to BlackRock, there are three reasons that continue to support the ongoing momentum in European markets, including global reflation, stronger earnings and attractive valuations.

Germany and France, which account for half of Euro area GDP, is expected to surprise on the upside as growth picks up speed. Moreover, the lessening political risk in Europe, leading indicators like purchasing manager index, demand for loans and sentiment surveys all suggest that the market continues to improve. BlackRock also pointed out that Eurozone stocks are particularly sensitive to changes in GDP and the ongoing global growth story could disproportionately support this region.

“Earnings surprises are part of a longer-term trend,” according to BlackRock.