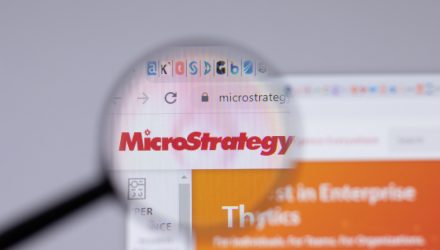 In MicroStrategy (MSTR)’s second quarter financial results, the company indicated that it plans to continue adding to its massive Bitcoin holdings.

MicroStrategy CEO Michael Saylor said in a press release that MicroStrategy currently holds over 105,000 Bitcoins, worth over $4 billion at time of writing. Saylor said that “going forward, we intend to continue to deploy additional capital into our digital asset strategy.”

Bitcoin acquisition has become something of a second mandate for MicroStrategy; the company’s Q2 Earnings Presentation has an entire section devoted to the quarter’s Bitcoin highlights.

With Bitcoin making up an increasingly significant portion of MicroStrategy’s balance sheets, holding the firm’s stock has been a means for investors to obtain indirect exposure to the cryptocurrency.

MicroStrategy stock appears in the portfolios of over 100 ETFs. Below are the ETFs holding with the highest portfolio exposure to the stock.

Since ETF Trends last covered ETFs holding MicroStrategy, each of these five funds have increased their allocations to the stock, some by a significant amount.

The Bitwise Crypto Industry Innovators ETF (BITQ) has maintained its position as the ETF holding the most MicroStrategy, increasing its weighting from 11.21% of its total assets in mid-June to 13.08%, as of time of writing.

BITQ launched this past May and focuses on pure-play crypto companies. It tracks the Bitwise Crypto Innovators 20 Index. Of its 31 total holdings, MicroStrategy is its largest.

The ETF with the second-highest allocation is the VanEck Vectors Digital Transformation ETF (DAPP), which has increased its MicroStrategy holdings from a weight of 4.87% in June to 6.38% at time of writing.

DAPP tracks the MVIS Global Digital Assets Equity Index and focuses on all-cap companies deriving at least half of their revenue from digital assets.

The Amplify Transformational Data Sharing ETF (BLOK) has also increased its MicroStrategy holdings from 5.75% of its total assets in June to 6.25% at time of writing.

BLOK is the market’s largest blockchain ETF and invests at least 80% of its assets in companies involved in blockchain technology development and utilization. The fund is actively managed with 46 holdings, MicroStrategy being the largest.

XSMO tracks the S&P SmallCap 600 Momentum Index, which currently has 115 holdings, MicroStrategy being its second largest. The fund aims to hold the 120 securities with the highest momentum scores within the index.