You are at:Home»Nasdaq Portfolio Solutions Channel»Biden’s EV Plan Could Put This Automotive ETF in the Fast Lane 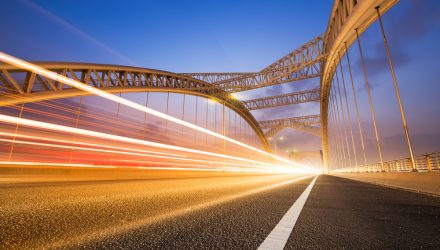 The Biden Administration wants 40% to 50% of cars sold in the U.S. to be electric by 2030. Count the First Trust NASDAQ Global Auto Index Fund (CARZ) among the exchange trade funds that should benefit from that push.

CARZ, which tracks the NASDAQ OMX Global Auto Index, has long been levered to the electric vehicle (EV) investment thesis due to its status as one of the ETFs with among the largest weights to Tesla (NASDAQ: TSLA). As of Aug. 4, Tesla is the largest component in CARZ at a weight of 8.69%, according to issuer data.

With dominant market share in the U.S. and a growing footprint in China, among other markets, Tesla is often viewed as the ideal EV play for U.S. investors. However, CARZ merits consideration due to its exposure to other automakers entering the EV space.

For example, Toyota, Daimler, and General Motors (GM) combine for about 22.5% of the CARZ and each is already established in the hybrid/EV space in some form.

CARZ Components on Board

Some CARZ components are signaling support for the Biden plan. Leaning on their experiences in California – one of the leaders when it comes to embracing EVs and reducing carbon emissions – BMW, Ford, Honda, Volkswagen, and Volvo praised the Biden plan.

“We were proud to stand with California to establish progressive new greenhouse gas regulations, and we remain committed to leading the industry in fighting against climate change,” said those automakers in a joint statement. “That’s why we support the Administration’s goal of reaching an electric vehicle future and applaud President Biden’s leadership on reducing emissions and investing in critical infrastructure to achieve these reductions.”

BMW, Ford, Honda, and Volkswagen combine for over 17% of the CARZ roster.

Fortunately for investors, the auto industry isn’t just paying lip service to the EV boom. These companies, including CARZ holdings, are committing financial resources to ensuring research and development is up to par.