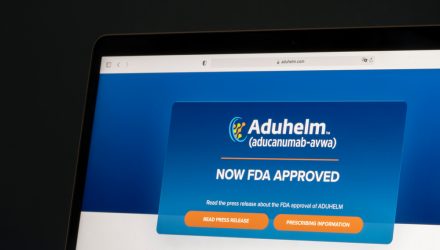 Alzheimer’s Drug Cost Pushes Pharmaceutical Prices Back Into the Spotlight

Biogen’s (NASDAQ: BIIB) Aduhelm sparked a rally in the biotech giant’s share price and hope that progress is being made in treating Alzheimer’s. However, the news isn’t free of controversy, and carries with it implications for healthcare exchange traded funds, including the VanEck Vectors Pharmaceutical ETF (PPH).

The $330 million PPH, as its name implies, focuses on traditional pharmaceuticals makers, not biotech stocks. While Biogen isn’t part of the fund’s lineup, but the Aduhelm hoopla is worth monitoring as it pertains to PPH and its 25 holdings.

“Pharmaceutical experts warn that the controversy could reinvigorate calls for drug pricing reform, potentially impacting the entire industry,” according to IHS Markit. “Some members of congress are already launching an investigation into Aduhelm’s approval and pricing. Biogen and development partner Eisai, meanwhile, have taken a defensive stance, working to explain the rationale behind its pricing while also opening the door to potential price change.”

In retrospect, it’s not surprising Aduhelm is generating controversy. It’s viewed as the first significant sign of progress in the battle against Alzheimer’s and its approval prompted several Food & Drug Administration (FDA) commissioners to resign.

More pertinent to PPH is how the coronavirus pandemic is bringing about dramatic shifts in the healthcare sector, some of which could be long-term positives for holdings in this exchange traded fund.

“The pandemic brought to the forefront the critical importance of healthcare in ways not seen for generations. It underscored the vital role that the pharmaceutical industry and innovative medicines have to play in ensuring global safety and security,” added IHS Markit. “The upshot has been a surge in support for greater healthcare system spending, which is now expected to grow by 5.8% to $8.8 trillion in 2021.”

As for the drug pricing issue, it’s likely the White House and Congress will tread lightly over the near-term. However, some states are already enacting drug pricing transparency legislation and countries outside the U.S., including developed and emerging markets, are pushing for similar reforms.

PPH is up 14% year-to-date and currently resides around all-time highs.