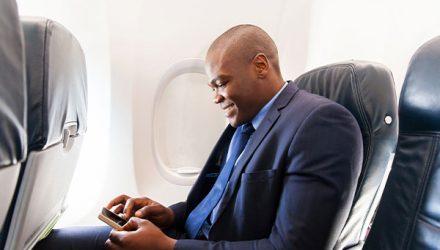 When Will Business Travel Recover? Sooner Than You Might Think

More than 2.1 million people boarded scheduled flights in the U.S. on Sunday, a 160% improvement from where we were at the beginning of the year. Leisure travel is mostly back as California and New York reopen their economies and as the European Union (EU) formally adds the U.S. to its list of countries approved for entry.

It’s appropriate, then, that the U.S. Global Jets UCITS ETF (JETS) launched last week on the London Stock Exchange (LSE), giving U.K. and European investors access to the global airlines industry. I’m excited to say that this marks the second time this year that U.S. Global Investors has expanded its product line to international markets, the first case being in April when our airlines ETF debuted on the Mexican Stock Exchange (BMV).

The offering comes thanks to our partnership with HANetf, Europe’s first independent full-service provider of UCITS, or Undertakings for Collective Investment in Transferable Securities. UCITS can be registered in Europe and offered to investors throughout the EU. Once approved, they become exempt from regulation in individual countries.

I’m confident the UCITS ETF will meet overseas investors’ demand for a product that seeks to track the global economic reopening.

In terms of reopening, the two big holdouts continue to be Canada (more on that later) and business travel. The difference between the two is that we’re seeing steady improvement with the latter—domestically, anyway.

A poll conducted this month among members of the Global Business Travel Association (GBTA) showed that domestic business travel is well on its way to recovery. Forty percent of respondents said that business travel within the country where their firm is based has already resumed, while a third said that their company has either decided on a start date or is working toward a date. Only 18% said that their company was “waiting to see what happens.”

International business travel is another story. Only 12% of respondents said business travel outside of the country where their company is based has resumed, a sign that we still have a long way to go yet.

Some companies’ hesitancy to resume business travel, though—particularly on the domestic side—is not in alignment with the results of another survey, which show that a vast majority of workers are more than ready to hit the road and take to the skies again.

According to SAP Concur’s Global Business Travel Report 2021, released last week, a whopping 96% of global business travelers said they were willing to start traveling again in the next 12 months. And with good reason: 80% said they were worried that the inability to travel could hurt them not just professionally but also personally.

As many of you reading this know, there’s no replacement to meeting clients and colleagues in person and attending live professional meetings and events (PMEs). Zoom fatigue is real, for women more so than men. Companies from Google to WeWork are working on introducing accessible holographic technology to be used in the office, but right now it’s expensive, and I suspect the “creepy” factor will lead to strong resistance.

Besides, more and more research continues to come out that meeting people in person and attending live events poses little risk if commonsense precautions are observed. A new paper by a team of health care scientists with the Ohio State University makes the case that a return to PMEs is “inherently possible in the current environment.” The team studied a number of PMEs that took place during the pandemic and found that, as long as safety precautions were observed, they ended up not being so-called super-spreader events.

“By setting standards to balance public health measures with meeting face to face, PMEs can help in a return to social interactions and networking,” the researchers write, adding: “As more of the population is fully vaccinated, these risks are further reduced.”

A good case study is the recent Bitcoin 2021 conference in Miami. An estimated 12,000 people from all over the world were in attendance. Some attendees reportedly tested positive for the virus, but the conference did not become the super-spreader event many people feared it would be.

Will Canada Finally Open Its Borders?

Again, California and New York—the number one and number three largest states by GDP—lifted nearly all restrictions last week as the share of residents who have received at least one vaccine dose surpassed 70%.

This is hugely positive, as both states were among the earliest and hardest to be hit by the virus.

It’s now time for the U.S.-Canada border to reopen to non-essential travel. The border is the longest in the world at 5,525 miles, and for every month that it remains closed, the U.S. economy loses $1.5 billion in potential travel exports, according to the U.S. Travel Association. That’s enough to support many thousands of American jobs.

The current restrictions, which have been in place since March 2020, were originally set to expire this coming toady, but they were extended for at least another month, all but guaranteeing another lost summer to travel and tourism.

This decision is not consistent with the science. Supposedly, Canada has rocketed past Israel in terms of the share of people who have received at least one dose. If things are going so well, why has the border not been reopened?

It’s against this backdrop that the Canadian Parliament continues to debate the controversial C-10 bill, which many worry would give the government the power to regulate the content that Canadians post on social media.