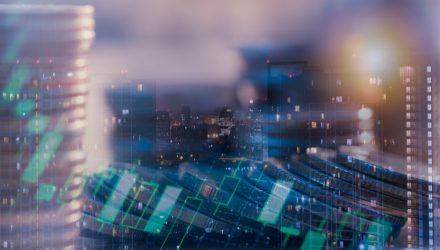 The Top Momentum ETF Struck a Value Pose as Expected

MTUM looks very different from a month ago. The $14 billion smart-beta index ETF just completed its semi-annual rebalance last week, as new relative strength data was utilized. As we noted in late April in a thematic research article Momentum ETFs: Keeping Up with the Times (etftrends.com) MTUM had previously rebalanced in November when growth stocks were still benefiting from a Covid-19-driven stay-at-home economy. In April 2021, MTUM was heavily weighted to the Information Technology (42% of assets) and Consumer Discretionary (20%) sectors and had minimal exposure to traditionally value-oriented Financials (1.5%) and no Energy sector holdings.

Unlike other U.S. factor ETFs offered by iShares, there are no sector constraints for MTUM, which allows the ETF to semi-annually adjust based on where the momentum is strongest. As we expected, MTUM shed many of these growth stocks and replaced them with value stocks. However, we underestimated how heavily weighted the fund would be to Financials.

MTUM focuses on stock-specific six- and 12-month performance records. The MSCI index is constructed in part using price performance data one month prior to rebalancing date with the security weightings based on a combination of a momentum score and the market capitalization weight of the stock within the parent MSCI USA index. The heftiest positions in the ETF are large-cap stocks that previously demonstrated relative strength, but the ETF holds approximately 125 total securities, many within the mid-cap sphere.

Financials became the new momentum stocks. MTUM’s stake in Financials skyrocketed to 33% of assets, with four stocks from the sector among the top-10. BAC, BRK.B, JPM and WFC are the fund’s largest but there are currently 26 Financials in the portfolio, up from the prior five, including more moderately sized Invesco (IVZ) and SVB Financial Group (SIVB). We also were correct that energy stocks would re-enter the ETF, comprising 1.9% of assets with EOG Resources (EOG) and Occidental Petroleum (OXY) among the five constituents, though we had thought there might be even more added.

Technology exposure was cut in half. MTUM now holds just 18% in Information Technology stocks, down from 42%, with many of the fund’s previously large positions eliminated. AAPL, MSFT, Adobe Systems (ADBE) and NVIDIA (NVDA) were top-10 positions in April but are no longer part of the ETF and the fund’s largest tech positions are now Applied Materials (AMAT) and PayPal (PYPL). Indeed, just four of the MTUM’s prior top-10 holdings, Tesla (TSLA), PYPL, and both share classes of Alphabet (GOOG) (GOOG.L) stayed in the portfolio.

Meanwhile, the removal of mega-caps Amazon.com (AMZN) and Nike (NKE) shrunk the Consumer Discretionary sector weighting to 11% of assets. As we predicted, with Americans emerging from their homes and planning to travel following receipt of Covid-19 vaccine, leisure-related Expedia Group (EXPE), and MGM Resorts International (MGM) performed well enough to be added to the ETF. 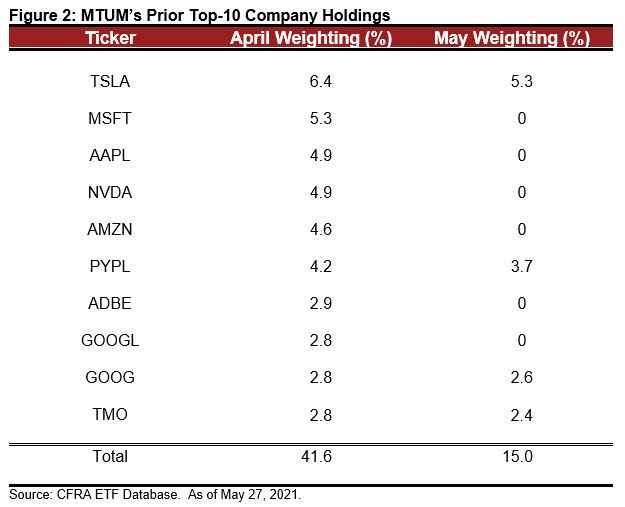 We believe investors need to regularly look inside smart-beta ETFs, such as MTUM, as they are not static. MTUM’s prospects will be driven by its new portfolio, which is why we do not solely rely on the fee or a past performance record to rate ETFs.