You are at:Home»Expert Insights»ETF Edge: Winning The Loser’s Game with Charles Ellis 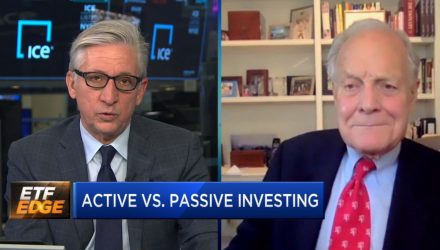 On this week’s ETF Edge, ETF Trends’ CIO and Director of Research, Dave Nadig, and host Bob Pisani were joined by investment legend Charles Ellis, founder of Greenwich Associates and author of “Winning the Loser’s Game,” to talk about the retail investing rush, among other topics, and how it changes the active vs. passive debate.

Addressing him directly, Nadig brought up Ellis’ thought that investing should not be entertainment, noting how the notion can be problematic. However, over the last year, it appears as though investing has become more and more like entertainment than ever in the past. This could come with the fact that people were living largely at home and had more capital to work with than they may have expected.

As far as how Ellis feels about this regarding changing markets, let alone his own opinions on the idea of entertainment-based investing, he concedes markets may be changing. Still, he’s firm in his hold on investments being taken seriously. With that in mind, Ellis does deliver an example based on his daughter’s choice to visit a casino every so often. The idea is that she will be losing money for the sake of entertainment, but it is an amount within reason.

“Everybody pays for recreation and entertainment,” Ellis notes.

Pisani expands on this by noting how the market is currently dominated by professionals trading with other professionals, which is very good. However, there has been a notable increase in retail investing, suggesting it may make up anywhere between 20-25% of the market. This amount of retail investors could mean a change in outlook based on what appears to be investors utilizing “dumb money.”

For Ellis, it’s essentially a strategy or game he has no interest in, nor would he recommend it to anyone else. Additionally, as far as those who do dive into the retail investing rush, those investors need to understand it is a fast and furious game. The ability to understand it and figure out the right strategy for success is very difficult.

Nadig adds, “Sometimes it does feel like we have two markets. We have the fast-moving, high-energy market that I think retail investors have been playing in. We also have this longer, slower, wealth-generating market that I think Charlie and I would agree is the one most investors should be paying attention to.”