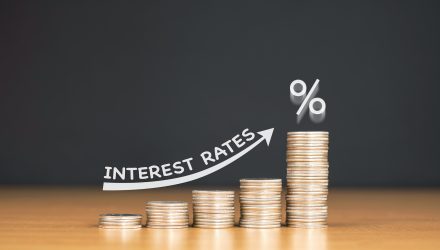 Stocks and index ETFs slipped on Friday amid surging bond yields, reigniting concerns that rising rates will damage the rise in equities, especially tech names. Rollover in the stock index futures may also be contributing to the decline.

The S&P 500 fell 0.4%, before paring those losses, slipping from a record high scored on Thursday. Meanwhile, the Nasdaq Composite reversed its gains in the prior session, dropping 1.4%, but has also since pared some of those losses. The Dow Jones Industrial Average led the three benchmark indices, climbing 0.53% thanks to gains in bank stocks, which are aided by rising rates.

Major stock ETFs are mixed on Friday, with the SPDR Dow Jones Industrial Average ETF (DIA) higher. Both the SPDR S&P 500 ETF Trust (SPY) and Invesco QQQ Trust (QQQ) are red on the day as of 12:30 PM EST. Index futures are rolling from the March to June contract, which could also be adding to the decline.

“This week’s U.S. bond auctions came and went without too much of a fuss and Treasury yields seemed to be settling into a new (higher) range,” Kit Juckes, Societe Generale macro strategist, said in a note Friday morning. “However, with the S&P 500 making a new high yesterday evening, we’ve taken 10-year Note yields back up to 1.6%, and [stocks are]lower this morning as a result.”

“The pattern seems clear enough: The equity market is seeing a sector rotation but not a correction; the bond market is seeking a new equilibrium in the light of a vastly improved economic outlook in both the U.S. and elsewhere; some policymakers are pushing back against the bond moves, with little success,” he added. “As yields rise, the dollar rallies, but when yields settle at a new level, the dollar drops back. The pattern probably goes on until bonds find an equilibrium, unlikely before the 10-year note yields have a 2-handle, judging by taper tantrums and past cycles.”

The swift climb in bond yields has moved investors to exit the Nasdaq and tech stocks again, as increases in interest rates can put undue pressure on high-growth tech stocks by limiting the relative value of future profits.

“Higher rates, less dovish central banks are now considered to be the single biggest threat for risk assets,” Ralf Preusser, Bank of America’s rates strategist, said in a note. “With the passage of the US fiscal stimulus package and the blistering progress in vaccinations in the US, a number of other key risks are falling by the wayside.”

Ned Davis Research estimated that the Nasdaq 100, which tracks the 100 largest non-financial companies in the Nasdaq Composite, would tumble another 20% if the 10-year yield reaches 2%.

Meanwhile, investors are optimistic that President Biden’s much-awaited relief bill will provide direct payments of up to $1,400 to many Americans as soon as this weekend. The package will also put nearly $20 billion into coronavirus vaccinations, which have been rolling out for some time now, as well as $350 billion into state, local, and tribal government relief.

The president announced Thursday evening that he would direct states to allow all adults to be eligible to receive the vaccine by May 1.