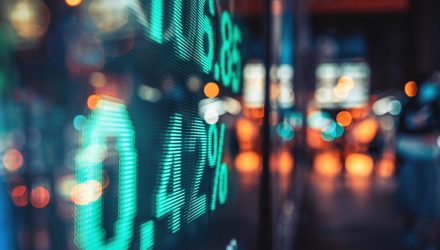 Stocks and index ETFs are gaining on Thursday due to better-than-projected unemployment data and optimism over a stimulus plan.

First-time claims for unemployment insurance hit 712,000 last week, an improvement from the 780,000 predicted by economists surveyed by Dow Jones. Jobless claims also dropped for the first time in three weeks as the labor market appeared to be resistant to spiking Covid-19 cases. Tomorrow, the much awaited jobs report arrives from the Labor Department, where the U.S. economy is predicted to gain 440,000 jobs while the unemployment rate is estimated to fall to 6.7%, according to Dow Jones.

“With some rumblings of stimulus progress and positive momentum on the vaccine front, labor market watchers could be ever hopeful for a more meaningful decrease in jobless claims in the long run,” said Mike Loewengart, managing director of investment strategy at E-Trade Financial.

Meanwhile, House Speaker Nancy Pelosi and Senate Minority Leader Chuck Schumer are asking Republicans to join together to help generate another round of coronavirus relief funding, using a bipartisan proposal from Senate moderates as a beginning.

“Democratic leaders appear to have yielded on their insistence on a multi-trillion dollar fiscal stimulus package, raising the odds that a deal can be reached before the end of the year,” Jan Hatzius, Goldman Sachs’ chief U.S. economist, said in a note Thursday.

“Compromise is within reach. We know where we agree. We can do this,” the Kentucky Republican said on the Senate floor.

Some analysts are concerned that the market may be overbought however, given the recent historic levels achieved, and the accelerated number of coronavirus infections and hospitalizations. Over 100,000 patients are currently hospitalized, according to data from the COVID Tracking Project. The U.S. also reported a record 2,800 Covid deaths on Wednesday, the highest single-day death toll ever reported, according to data compiled by Johns Hopkins University.

Morgan Stanley’s Mike Wilson said that investors may not be considering the risk that a rise in treasury yields may spark a potential stock correction, as the 10-year has rallied strongly this week to above 0.9%.

“The market is overbought and the market is probably a little bit overvalued quite frankly because interest rates now are finally starting to catch up,” Wilson said. “The risk in the market now is that as 10-year yields finally start catching up, we have a valuation reset because stocks are long duration assets, particularly the U.S. stock market, and that could create a bit of a correction.”