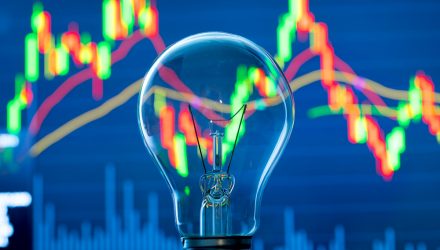 Did ETF Re-balancing Move The Market?

This is a question I have been asked now at least 10 times since the beginning of trading this week, and it’s a reasonable question.  After all, if 34-45% of the dollar value traded is ETFs these days (which it has been) the implication is, to be cavalier about it, that ETFs are a big deal.

So how would you test this?  ETFs are traded, and thus settled and tracked, pretty much like any equity.  As such, assigning ownership is a huge challenge. Sure, you can look at 13F filings and see how much Apple a particular mutual fund holds, but you can’t look and see whether Bob from Missouri sold his Apple, or for that matter his SPY position.

What we can track, however, is flows. If what we care about is truly “moving the market” then we shouldn’t care about secondary market trading.  If the entirety of SPY changes hands today, but there are zero net in or outflows, that means every buyer was able to find a seller so easily, the net “opinion” of the ETF holders was in fact neutral.  Put another way, the same amount of money wanted to be long yesterday as today.

From a flows perspective, we can really easily see the impact of re-balancing.  Our thesis is that money should be coming out of Fixed Income and going into Equities at re-balance, because equities got crushed and Fixed Income, despite it’s problems, was the hero for the quarter.

Here’s the net flows for the previous five trading days (March 27-April 2), which seems like a good window to think about.  Not everyone (hopefully not most people) mechanically re-balances on the close of the quarter end. 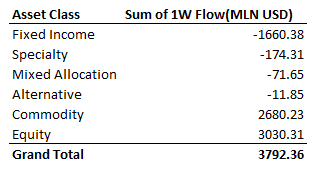 To me it’s pretty unequivocal that the data matches the thesis. Over the entirety of over 2,000 ETFs, in this 5 day window we had $1.6b in outflows, and Equity had $3b in inflows.  The problem here is that we’re capturing every bit of noise possible in 5 data points, so the old saw of “correlation != causation” is probably good to apply. After all, we saw nearly as much money flow into Gold (which was up) and Oil (I don’t need to tell you) in the same window, as investors were doing one thing, while bottom-fishers were doing another.

But the bigger reason to be skeptical is that this entire thesis can be proven simply inside Vanguard funds. While (again) we can’t prove that Vanguard funds are more owned by people with advisors or who are managing their portfolios with rigorous rules, it doesn’t seem unreasonable to suspect that Vanguard is more like that than the industry as a whole.  And here’s how Vanguard looks for this window:

So yes: it looks like Vanguard investors are even more inclined to make this kind of move than anyone else.  So much so that they can explain essentially the entire market dynamic by themselves. All that said: take a whole shaker of salt with this.  $4b in ETF flows isn’t even a big day, much less a big week.  So at most, what I’d conclude is that: Yes, we can see the rebal, but No, it ain’t movin’ nothin’.

Bonus Chart: I thought it was interesting to see just how dynamic flows are in Vanguard in such a short window: