You are at:Home»Alternative ETFs»Copper ETFs Could Have a Good Year Ahead 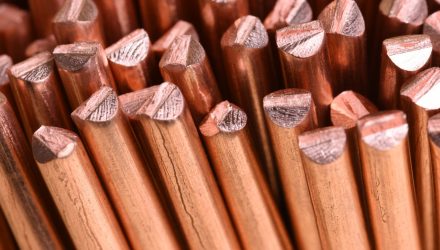 Copper ETFs Could Have a Good Year Ahead

Several other banks, including Citi and Goldman Sachs, have also mirrored Morgan Stanley’s projections, arguing that copper could break out of the $5,800 and $6,400 per tonne range. Goldman estimated copper prices could hit $7,000 while Citi believed copper could reach $6,700 in the next six months as President Donald Trump finalizes a trade deal with China and the global economy rebounds.

Copper prices were trading around $6,125 Wednesday and were up 4% since the start of the year.

“FCX’s earnings sensitivity to copper is still the highest among its peers, and combined with its high trading liquidity, we believe it will emerge as the go-to large-cap stock for exposure to a copper price rally,” Morgan Stanley’s lead analyst Piyush Sood said in a note.

ETF investors can also gain exposure to the metals and mining space through miner-related ETFs, such as the SPDR Metals & Mining ETF (NYSEArca: XME), which is designed to track the broad metals and mining segment, and the the Global X Copper Miners ETF (NYSEARCA: COPX), which takes a more focused approach to copper miners.