The lengthy bull market and the recent reappearance of market volatility has some investors worried that another 2008 is right around the corner. While longevity and volatility often precede bear markets, they rarely cause them. In our view, bear markets historically have been initiated by one or a combination of three conditions, none of which we believe are currently a sufficient threat.  The three conditions are 1) valuation excesses, 2) economic recession, and/or 3) tightening monetary policy.

Unlike 2008…Neither Stocks nor Home prices are at excessive valuation levels:
Bear markets can be triggered by excessive asset valuations that lead to the eventual bursting of bubbles ala the ‘Nifty Fifty’ stocks in 1970’s or the Dot-Com stocks in 2000. Today, like in 2008, US equity valuations are above their long-term trend, but generally not enough to trigger a bear market, according to RiverFront’s Price Matters methodology. In addition, Riverfront believes that stocks are attractively priced relative to bond yields. Historically speaking, stock multiples near current levels are supported, even should bond yields rise from current levels (for more on this, see last week’s Strategic View). 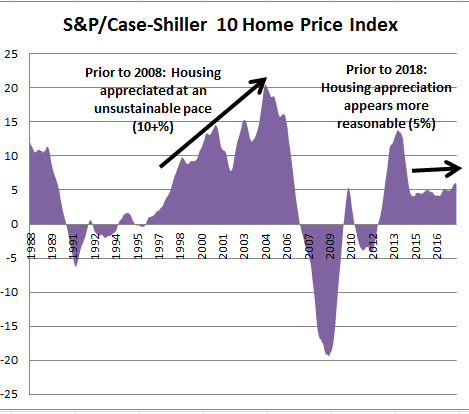 Source: Factset Research/RiverFront. Past performance is no guarantee of future results. You cannot invest directly in an index

However, asset bubbles can occur anywhere and some of the most historic bubbles have occurred in non-equity asset classes, including commodities (1980), Japanese real estate (1990) or even tulips (1630). Heading into 2008, an obvious bubble existed in the housing market that does not exist today, as shown in the chart above. In our view, the bursting of a housing bubble can have a greater impact on society than the bursting of a stock market bubble because more individuals have exposure to housing than stocks.  Backing up that conclusion, the conference bureau reported that the latest census data (2011) suggested that nearly 70% of household wealth comes from housing.

Unlike 2008…economic growth is accelerating, not slowing:

The second condition that generally leads to a bear market is the threat of a recession.  The equity markets will often anticipate a recession by 6-12 months so investors need to be closely monitoring both macro (economic) and micro (corporate earnings) conditions for signs of a a slowdown.  Even before the housing bubble burst and caused the “great Recession”, there were signs of an economic and earnings slowdown in 2008 that do not exist today.  In fact, we believe there are more signs of a ‘second-leg’ of economic expansion in 2018; than a recession, as shown by both charts below.

Unlike 2008…the Fed does not appear to be ‘hitting the brakes’:
Tightening monetary policy often ushers in recessions because rising interest rates create attractive substitutes for stocks and there are fewer dollars ‘sloshing around’ to push equity prices higher.  Although the Fed is currently hiking rates, their intentions and today’s monetary conditions are markedly different today than they were in 2008.  Prior to 2008, the Fed was aggressively trying to fend off rising inflation, which was approaching 3%, and a housing bubble where home prices were appreciating at an annual rate of over 15%.  To that end, the Fed raised the target Fed Funds rate 17 times from 2004 to 2007, ending at a restrictive 5.25%.  Today, with inflation only registering ~2% and home prices appreciating at a more sustainable 5% pace, the Fed can be patient.  It is our view that the 5 rate hikes that have been implemented since 2015 have been meant to remove the excessive accommodation that was put in place following the Financial Crisis and not targeted to slow the economy.  Even factoring in 3 – 4 hikes this year, we are likely to end 2018 with rates still well below the mid – 2007 peak, in our view. 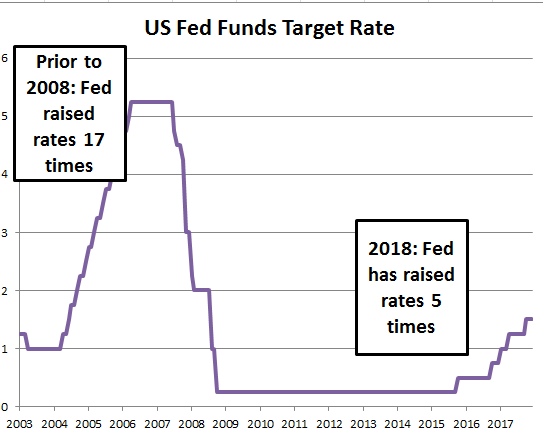 ‘Shock’ Indicators Still Benign:  We recognize that a ‘shock’ which could cause a recession needs to be factored into our analysis above. A major trade war (which we assigned a 30% probability to in our 2018 Outlook) would indeed qualify as a shock. The stock markets’ recent decline on the back of the potential imposition of tariffs on steel and aluminum has alarmed investors who fear a trade war.  President Trump’s quip that “Trade Wars are easy to win” is either brinkmanship or economic naivety (or a bit of both). We believe it is mostly brinkmanship but the stakes are high. Trade wars have no long-term winners in our view. We believe, on balance, that neither this Administration nor our trading partners want an escalating trade war. We are not currently positioning portfolios for such a shock, in part because the typical ‘early warning indicators’ of a shock are not flashing.

From an ‘early warning’ perspective, we listen to the bond market, because bond investors tend to be more sensitive to ‘bad news’ than equity investors.  When bond investors worry about something, credit spreads tend to widen.  Today, unlike in 2008, credit spreads are not widening, but have actually tightened in 2018 (see left-hand chart below).  Second, the excessive financial leverage that has the tendency of turning a small shock into a crisis is not present, in our opinion.   Through the leverage lens, consumer leverage as a percentage of GDP has fallen from 97.7% in 2008 to 77.5% today (source: Ned Davis Research). In addition, banks have significantly more capital at their disposal to absorb potential losses (see right-hand chart below).

Bottom Line:  Despite the recent jump in volatility, we believe there are far more differences between 2018 and 2008 than there are similarities.  These differences are what give us confidence to believe that the bull market that began in 2009 will not end in 2018.  We welcome volatility since it is a condition that tends to strengthen the foundation of a bull market, similarly to how stress makes a tree grow stronger roots.