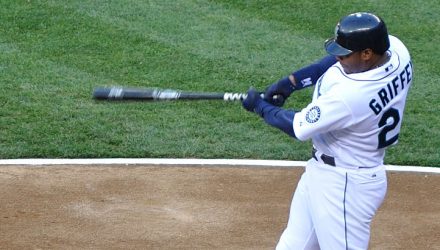 Why Investors Should Listen to Hall of Famer Ken Griffey. Jr.

Consistency of returns is an important driver of overall investment results, just like in sports and other areas of our lives. In fact, investors and advisors could learn a lot from the intentional consistency sought after by top sports performers.

On July 24th, the greatest ballplayer I’ve ever seen was inducted in the National Baseball Hall of Fame with a record-setting 99.3% of the vote. Reflecting on his career, Ken Griffey, Jr recently said:

“On the Mariners, we had this philosophy in the clubhouse that we referred to as Baseball Gods. Maybe it was more of a superstition than a philosophy. When someone referred to Baseball Gods, we were acknowledging that this game will make you feel human really fast: Never get too high on yourself and never get too low. It was a reminder that you’re never as bad as they say you are and never as good as you think you are.”

What Griffey said about baseball can also be said about the markets: they always have a way of humbling you. It’s important to keep your head on straight when markets are either soaring or crashing.

Unfortunately, that’s easier said than done given the wild ride the markets have been on over the last decade or two. The graph below shows a breakout of annualized returns for every 3-year period between July 1997 and June 2016. 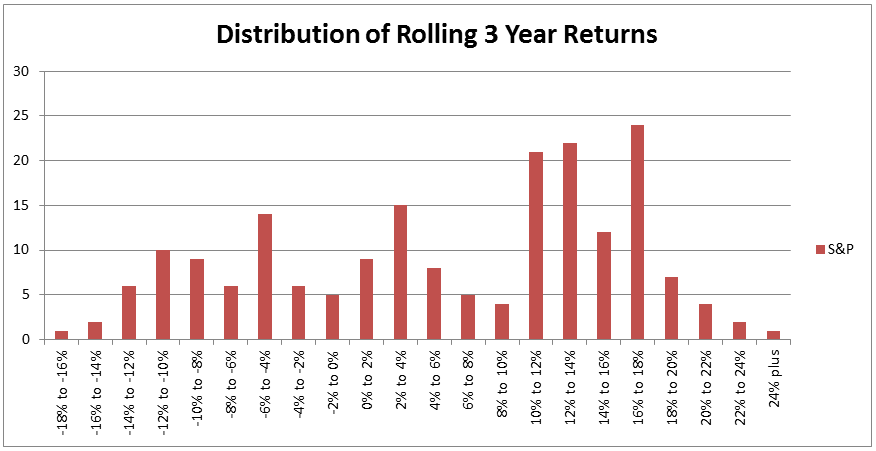 Return Distribution – A Test of Consistency

Usually a distribution will be clustered near the mean, or average result, and then gently slope off in both directions.

However, this distribution has two or maybe even three peaks (tri-modal). A large number of occurrences cluster in 10%-to-18% range, which represents a very healthy return.

In addition, there are also a large number of occurrences where the annualized three-year returns were in the -8% to -14% range. Even more interesting, while the average three-year annualized return for the S&P 500 is 5.65%, there are very few times since July 1997 that the S&P 500 was close to its average – it was typically either way above or way below. 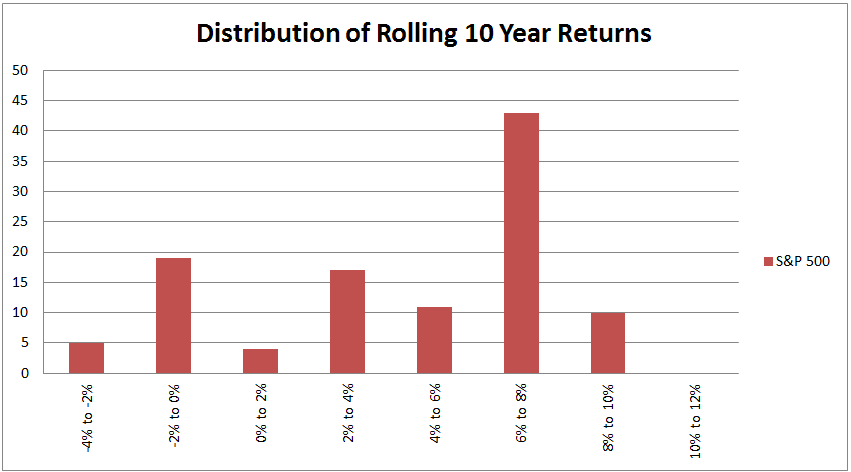 A similar, bi-modal distribution appears when looking at long-term, ten-year annualized returns. The largest bucket representing 39.4% of the outcomes is the 6% to 8% range; a perfectly acceptable result for most investors.

Worryingly though, the second most frequent range of ten-year returns is actually negative, ranging from -2% to 0%. Combined with the -4% to -2% bucket, 22.0% of the observations in this range were “lost decades.”

The Defined Risk Strategy was designed to mitigate the impact of these outlier events and possibly provide a smoother, more reliable, more consistent outcome. By actively hedging against bear markets, the DRS has a much smaller “left tail” of bad outcomes. Over its 19 year history the DRS has weathered the two largest bear markets since World War II: the dot-com bust of 2000-2002 and the financial crisis of 2007-09. Below we see the distribution of annualized three-year returns of the DRS compared to the S&P 500.