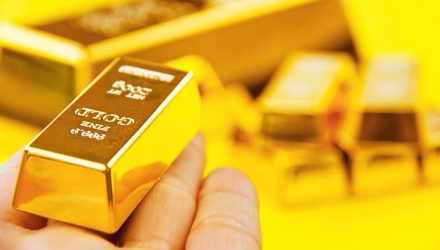 “All metals except gold lost in April, which hasn’t happened since May 2010 and has only happened 6 times in history (since lead, the last metal was added in Nov. 1994.),” said S&P Dow Jones Indices in a recent note. “Gold was not just the only positive metal in April, but was the only commodity of all 24 in the S&P GSCI in backwardation. This is the first time in history that gold was the only backwardated commodity (since 1978 when gold was added into the index.) Backwardation is a condition describing the forward curve where the contract with a nearer expiration date is priced higher than the contract with a later expiration date.”

Investors widely expected gold to rally if Republican Donald Trump won the presidential election in November, which he did, but that thesis proved incorrect. Democratic challenger Hillary Clinton may have actually been the preferred victor for gold ETFs because historical data suggest gold performs better when Democrats are in the White House.

“The backwardation in gold reflects high demand for the metal, which many investors flock to as a safe haven.  Since gold has historically zero correlation to the S&P 500 (0.02) and very little to the S&P GSCI (0.18) (using monthly data since Jan. 1978,) it has provided a diversification benefit to investors using equities and other commodities,” according to S&P Dow Jones.