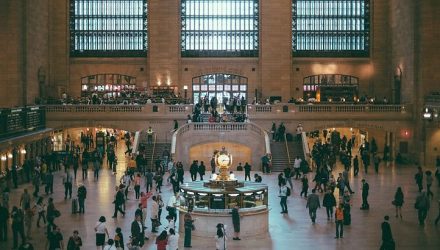 From Outlook to Allocation as Post-Election Rally Continues

In our first article for the ETF Strategist Channel, we laid out a case for using macroeconomic analysis to drive a sector allocation investment approach. Here, we examine how aspects of our current outlook can apply to potential sector allocation decisions.

U.S. stock markets have continued their post-election rally so far in 2017 as investors seemed to align with our view that the risk of recession is less than it appeared in mid-2016. Within the continued stock market rally, however, U.S. sector leadership has shifted markedly this year. Many of the economically-sensitive sectors that led in fourth quarter of 2016 (particularly post-election) lagged in the first quarter of 2017 (Q1), including Energy and Materials.  Meanwhile, Information Technology and Health Care, sectors with earnings growth opportunities that are less reliant on a material economic reacceleration, were leading performers in Q1.

The shift in U.S. sector leadership this year may have been the result of political reality setting in for investors.   No president has ever been able to fully realize his policy aims.  Checks and balances exist even when one party controls the White House and Congress.  This is already evident with the new administration’s initial failure to repeal and replace Obamacare.  Further, even when pro-growth policies do pass, they always take time to implement.  In Q1, we believe investors began to better-appreciate that the timing and potential impact of pro-growth initiatives are far from certain.  We anticipate political hopes and fears that distracted from economic fundamentals will likely continue to fade, and U.S. equity investors will refocus on earnings growth opportunities in the coming quarters.

Real GDP growth in the U.S. has trended around 2% since 2010, as illustrated in the figure below.  We believe this prolonged period of slow expansion has gradually released pent-up economic demand since the last recession, leaving less potential for a powerful expansion ahead.  While the new administration’s potential pro-growth policies likely reduce the near-term risk of recession, we still see no catalyst for a material sustained reacceleration of the U.S. economy, and we expect moderate economic growth to continue. 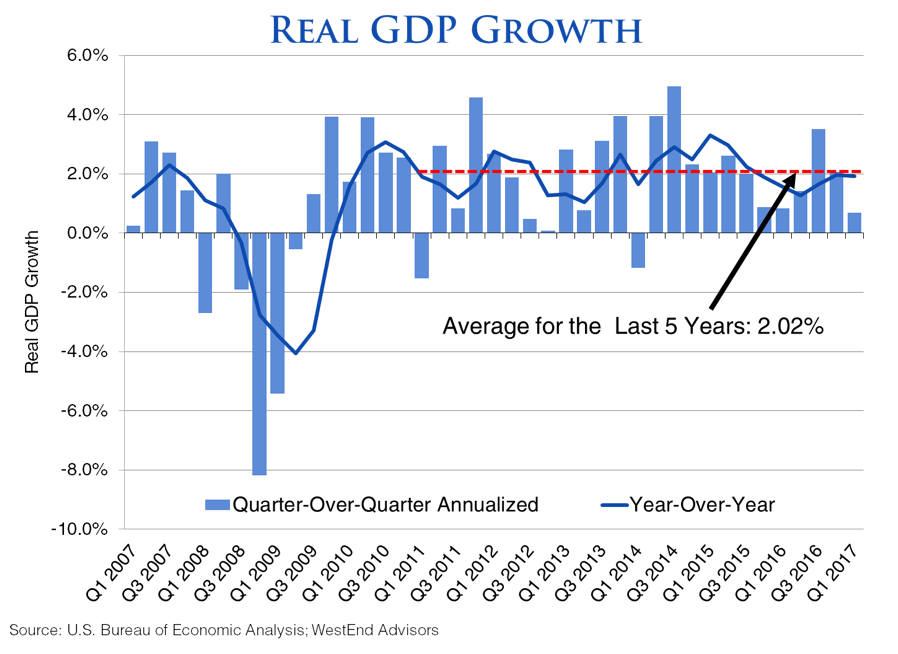 We also anticipate the extended period of moderate economic growth to be accompanied by rising inflation and higher interest rates.  Nearly eight years of slow economic growth with limited productivity gains (by historical standards) have significantly reduced slack in the labor markets.  The resulting wage inflation can put upward pressure on broader inflation measures and, in turn, longer-term interest rates.  Meanwhile, the Federal Reserve’s attempt to normalize monetary policy places upward pressure on shorter-term interest rates.  Additionally, real interest rates (the spread between nominal interest rates and inflation) remain at essentially zero.  While low real rates are common early in an economic recovery, real rates have persisted at these levels for close to a decade.  The combination of rising inflation, Fed monetary policy normalization (i.e. rising short-term rates), and a potential return to positive real interest rates could drive up rates across the yield curve as the economic expansion continues.

In the fundamental environment we anticipate, one sector in which we see new opportunity is U.S. Financials.  While we typically view the Financials Sector most favorably in a rapidly expanding economic environment, we also analyze and account for differences from one market cycle to the next.  The current cycle has been characterized by modest economic growth and increasing regulatory headwinds for Financials, largely in reaction to the 2008 financial crisis.  We believe a further extension of moderate economic growth, combined with a reversal of regulatory headwinds, should materially benefit the Financials Sector.  Increased confidence in the durability of the expansion, along with potential tax changes, should support growth in lending and increased merger and acquisition advisory activity.  A less constraining or oppressive regulatory environment, with fewer restrictions on lending, trading activities, and how banks invest their capital, should allow for enhanced revenue growth and profitability for major financial firms.  Additionally, rising interest rates could provide a boost to bank profitability as a portion of many banks’ existing loan rates adjust with higher short-term interest rates.