You are at:Home»Currency-Hedged»Australia Currency ETF in Trouble as Traders Bail on Aussie Dollar 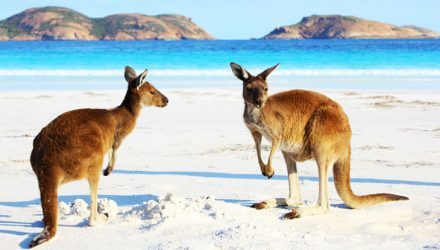 “Leveraged funds cut net long positions to 12,879 contracts in the week through May 9, the sixth straight reduction and down from as high as 53,601 at the start of March, according to data from the Commodity Futures Trading Commission. Optimism has evaporated as the prices for iron ore, Australia’s biggest export earner, plunged,” reports Michael Wilson for Bloomberg.

Thanks to comparatively high interest rates, Australia ETFs like EWA sport enticing dividend yields, which can help investors generate current income while expanding the international portions of their portfolios.

“Policymakers expect the economic growth to increase to a little above 3 percent over the next couple of years and inflation is estimated to rise further gradually. Interest Rate in Australia averaged 4.74 percent from 1990 until 2017, reaching an all time high of 17.50 percent in January of 1990 and a record low of 1.50 percent in August of 2016,” according to Trading Economics.

While the Reserve Bank of Australia (RBA) may be at the end of its easing cycle, there are few, if any, signs that the central bank there is poised to embark upon a tightening cycle. Australia’s benchmark interest rate of 1.5 percent is a record low for the country, but well above most other developed markets, indicating there is room for further downside.

“The Australian dollar may be vulnerable to further losses Wednesday if wage data for the first quarter fall short of forecasts, said Peter Dragicevich, a foreign-exchange strategist at Nomura Singapore Ltd,” according to Bloomberg.