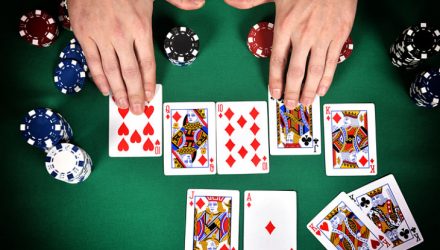 With This Hand, The Fed Should Check Rather Than Raise

It appears the market has priced in the beginning of a series of Federal Funds rate hikes over the next 12 months. Many are praising the Fed’s most recent rate hike action and few are questioning it.

The U.S. Federal Reserve Bank has primarily focused on managing inflation by targeting the widely published fed funds rate. Historically, the Fed has targeted between a 2.0-5.0% fed funds rate, based on several inflation indicators.

Currently, the Fed is targeting a 2.0% rate of inflation, and the latest core CPI rate has clocked in at a 2.2% annual rate, slightly higher than the Fed’s target. Despite the slight uptick in the core CPI rate of inflation, we believe it is premature for the Fed to shift policy toward tightening. There are several reasons for this, ranging from weak real economic growth both here and abroad along with year-over-year declining real wage growth.

It’s never popular to go against the consensus, and for many in the research business, it can be a career killer. The upward bias is likely an outgrowth of managing the principal-agent relationship. Once a comfortable position is taken then research is done to re-enforce or support that position.

For long term investors, it is crucial to focus on the hard data and to be aware how consensus thought or short-term market behavior is influenced. In fact, I find it more compelling to understand the “outliers” or those with a view that is at odds with the consensus.

One example where the consensus has gotten it wrong over the last several years is in the bond market. Each January, for the past several years, forecasters deliver their annual outlook for the upcoming year. The one constant in these annual market forecasts was that bond yields would be higher, when in fact the opposite has occurred. Critical thinking would require one to investigate why this is.

We have stated for several quarters now that global economic growth was destined to tread water below the long-term averages and that inflation fears were overblown.

The primary drivers of this structural effect include a world awash in debt, a rapidly changing global labor market, low worker productivity, unfavorable demographics, and a widening cultural and economic gap. Specific to short term interest rates, we feel this data does not require the U.S. Fed to raise interest rates any time soon.

Governor Kashkari firmly stated his rationale for dissent at the mid-March FOMC meeting. His view was that the Fed has not yet met its dual mandate on inflation and the jobs market. He also felt that a specific plan towards balance sheet normalization be communicated to the markets.

This has not been done yet probably because the Fed really does not have the answers. Why is it that The Federal Reserve Bank of Atlanta GDP Nowcast shows real GDP at a 0.60%2 annual rate vs. 2.5% for The NY Federal Bank’s GDP Nowcast?3 Yet there was nearly a unanimous vote for a rate hike in March.

The uncertainty within the Fed alone should warrant a “stand pat” policy on interest rates for now. Our view is that inflation is not showing up in the labor markets, in fact just the opposite. People are under- employed and real wage growth has remained flat for several years. There is excess capacity and weak demand around the globe. The secular shift from a manufacturing to a services sector society has held down productivity, capital investment, and consequently real economic growth.

Even though money supply has increased 10 fold since monetary easing began in this current cycle, the velocity of money has not, hence the lack of inflation. Banks have not been incented to lend money, and stricter lending standards have meant fewer people and businesses demanding loans (outside of student and sub-prime auto loans).

Anecdotally, inflation has trended lower thanks to the “Internet of Things” like Amazon and UBER, combined with the corresponding destruction of the brick and mortar retailers and less frequent use of rental cars and taxis.

I would ask Chairperson Yellen, “Where the hard evidence that higher inflation is imminent and that real economic growth is vastly improving?” The Fed has a track record of shifting policy at the wrong time, yet “Mrs. Market” seems to forget that, while still pinning its hope on a Fed-measured “stair-step” approach to raising interest rates in an effort to contain any possible outbreak in inflation that could accompany higher real growth rates.

The statements herein are based upon the opinions of Palladiem and the data available at the time of publication and are subject to change at any time without notice. This communication does not constitute investment advice and is for informational purposes only, is not intended to meet the objectives or suitability requirements of any specific individual or account, and does not provide a guarantee that the investment objective of any model will be met. An investor should assess his/her own investment needs based on his/her own financial circumstances and investment objectives.

This article was contributed by Palladiem, a participant in the ETF Strategist Channel.