You are at:Home»Alternative ETFs»Silver Surges, But ETF Investors Aren’t Impressed 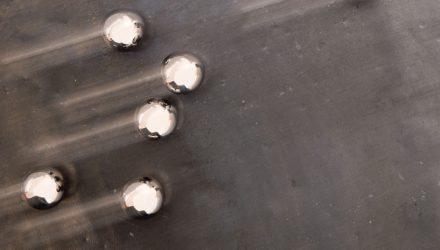 The iShares Silver Trust (NYSEArca: SLV) and ETFS Physical Silver Shares (NYSEArca: SIVR) are two of this year’s best-performing commodities exchange traded funds, but investors are not flocking to silver as the white metal surges.

Silver and other precious metals enjoyed safe-haven demand as the equities market plunged into a correction. The Federal Reserve is targeting three interest rate hikes this year, which could white on precious metals, but some market observers believe there is upside to be had with the white metal. The Fed boosted borrowing costs in March.

“While the price of silver is near the highest in five months and money managers are the most bullish on record, the rally has failed to convince buyers of exchange-traded funds backed by the metal. Money is flowing out of iShares Silver Trust, the biggest such ETF, for a seventh straight month, the longest slump in more than a decade,” reports Luzi Ann Javier for Bloomberg.

While money has flowed out of SLV over the past seven months, that ETF and the rival SIVR are each up just under 5% over the past six months. Both are outperforming the largest gold ETF by nearly 200 basis points over those six months.